Several BJP leaders have raised questions over the vaccinations of Gandhis 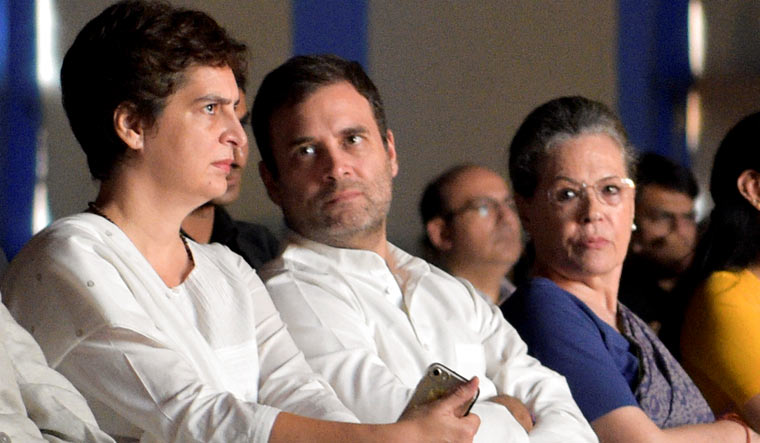 Sonia Gandhi has taken both doses of the Covishield vaccine, the Congress said on Thursday following questions from the BJP and asked the government to follow the 'raj dharma' of vaccinating all Indians instead of creating non-issues.

Priyanka Gandhi Vadra has taken her first dose of the vaccine and Rahul Gandhi will take his shot post COVID-19 recovery as advised by doctors, party chief spokesperson Randeep Surjewala said while hitting out at the BJP for raising doubts on whether the Gandhis had got their jabs.

Several BJP leaders have raised questions over the Gandhis' vaccinations and accused them and the party of creating "vaccine hesitancy" in the country.

"Instead of beating around the bush and creating non-issues, the Modi government should concentrate on vaccinating 80 lakh to one crore people daily in order to meet the target of 100 crore Indians by December 31, 2021. This is the only 'raj dharma' they need to follow after failing the people of India during the second wave of COVID-19," Surjewala told PTI after the BJP sought vaccination details of the Congress' first family.

Harsh Vardhan is India's health minister and "he should know that Congress president has taken both the vaccination doses of Covishield", the Congress leader said.

"Shri Rahul Gandhi was scheduled to take the vaccination on April 16, 2021. As he had minor flu symptoms, he was tested first and the RT-PCR test came positive on April 18, 2021. Post recovery from COVID-19 and as advised about the vaccine gap by doctors, he would be vaccinated," he said.

Congress general secretary Priyanka Gandhi has also taken the first vaccination dose, he said. Thereafter, her husband tested positive on March 28 and since she was exposed, she and her husband will take the necessary vaccination shot after the mandatory vaccination period has elapsed, Surjewala said.

He alleged that the Modi government and the health minister are "guilty of Himalayan mismanagement of vaccination" in India.

"The obduracy and incompetence of the prime minister and health minister have endangered the lives of millions of Indians leaving us unprepared and unprotected of a possible third wave of coronavirus," he said.

In the six months between January 16 to June 16, he said, only 3.51 percent of India's total population of 140 crore have been vaccinated with both doses.

This is the lowest vaccination coverage in the world, according to the Congress leader.

Surjewala noted that the average vaccination up to June 16 is 17.23 lakh per day for the period of six months. At this pace, it will take 944 days to vaccinate all 94.4 crore Indians with both doses, after deducting the already administered 26 crore doses, he claimed.

This would mean that vaccination coverage would be possible only after 2.5 years as 944 days would end on January 16, 2024, he said.

"The simple question is can India afford to wait this long," he noted.

"Instead of addressing the vaccination issue, a belligerent Health Minister Dr Harsh Vardhan and the BJP are attempting to derail the issue by focussing on vaccination of Congress president Sonia Gandhi, Rahul Gandhi and Priyanka Gandhi Vadra," the Congress leader alleged.

The Congress has been criticising the government's vaccination strategy and asked them to make public its policy on how to vaccinate all Indians and protect them from COVID-19 in future.