Villagers say no decision to end protests, call for mass meeting on June 28 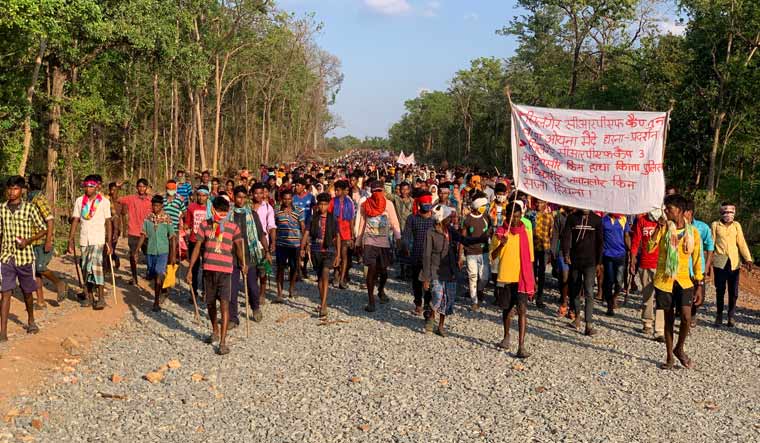 Despite a virtual meeting held by Chief Minister Bhupesh Baghel with select villagers and people’s representatives on Saturday, tribal villagers from Silger in Sukma district and their supporters from elsewhere have decided to continue their month-long protests against setting up of a security forces’ camp, albeit in a diminished format.

On Sunday, the Moolwasi Bachao Manch, which has been coordinating the protests, came out with a poster announcing the continuation of the sit-in, although it will be now in a relay form and will follow COVID-19 protocols. Such relay protests will continue till June 17 and on June 28, a mass meeting will be held at Sarkenguda, the poster announced.

The Manch alleged that the news of the protests having been called off was a rumour spread by the police-administration and some ‘vested interests’. They also alleged that the leaders of the Manch were threatened by the Bijapur district collector after he called them to Tarrem police station on June 8 and 9. 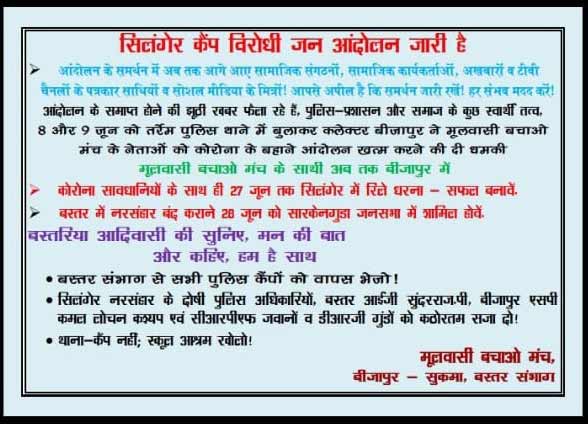 The Manch reiterated their main demands of withdrawal of all police camps including the Silger camp from Bastar division, and strict action on the police officials involved in the firing incident of May 17 that killed three villagers. They also demanded action against inspector general of Bastar range Sundarraj P. and Bijapur superintendent of police Kamlochan Kashyap particularly. The other demand is setting up of schools and hospitals in Bastar rather than security forces’ camps.

Sources from the ground said that on Sunday, at least 1,000 tribal persons participated in a sit-in near the Silger camp. During the last two days, the number had been lesser, but increased on Sunday. However, before June 9, around 5,000-10,000 villagers had been protesting at the site.

Activist Soni Sori who has been supporting the protest on the ground told THE WEEK over phone that the protests were certainly not called off and will continue, though she did not give much details.

Later, the Moolwasi Bachao Manch came up with a detailed press release saying that they were disappointed at the video conference meeting with CM as the Silger issue was not discussed much and the meeting focused only on announcement of development projects.

They said that they were not against development work but wanted fulfillment of their demands and it was for this purpose that they wanted to meet the CM personally through a delegation. The Manch expressed hope that the CM will keep his promise to give them time to meet personally within a fortnight, while reiterating that meanwhile their protest will continue.

Confusion on end of protest

There had been conflicting news regarding calling off of the protests at Silger since June 9, a day after a delegation of activists including convener of Chhattisgarh Bachao Andolan Alok Shukla and human rights activist Bela Bhatia met Chief Minister Baghel and Governor Anusuiya Uikey separately on June 8. Both the CM and the governor had agreed to meet a delegation of villagers from Silger. The CM's agreement had been communicated to the protesters by 1pm of June 8.

However, meanwhile back in Silger in the late afternoon of June 8, a video of activist Soni Sori announcing the decision to call off the protests due to impending agriculture season (during monsoon) and the threat of COVID-19 got circulated.

On June 9, informal spokespersons of the villagers announced before a clutch of media persons in Silger that they were withdrawing the mass movement, but the struggle would continue “in a constitutional manner with due permission” at Sukma district headquarters. This was after a delegation of the villagers and some community leaders went to meet the Bijapur district collector and the SP at Tarrem.

After this, conflicting news of the protests being called off and the protest sites having been vacated emerged leading to a lot of confusion. Sources told THE WEEK that this happened as the police and district administrations of Sukma and Bijapur almost forced the protesting villagers to leave the spot, even providing tractors for the purpose on June 9.

However, later news started filtering in about the decision of the villagers to continue with the protests, even as the chief minister held a virtual meeting with a section of villagers and people’s representatives on Saturday.

During the meeting, Baghel said that the state government was committed to protect the welfare of the tribal people. He said everyone wanted peace, development and justice in the (Bastar) region. Baghel called the Silger incident unfortunate and expressed grief on the same. He said that it was a circumstantial incident and a magisterial probe has been ordered. The CM called upon the villagers to cooperate with the probe.

“The state government wants the facts to come out and there will be no hesitation in taking action on the basis of the facts coming out of the probe,” Baghel said.

The CM also announced setting up of a 30-bed hospital in Jagargunda of Sukma and a Rs 5 crore worth water filtration facility and solar dual pump to reprieve the residents of 10 villages in Gangalur region from the problem of red-tinted water.

Other development works worth Rs 11.2 crore including the electricity line extension in Silger and setting up of a 50-seater Ashram Bhavan in the village was also announced by the CM.

Silger issue has been raging since setting up of the Silger camp housing personnel of CRPF, Chhattisgarh police and District Reserve Group (DRG) came up on the restive borders of Bijapur and Sukma district on May 12.

Villagers, claiming that their consent through Gram Sabha was not taken for setting up of the camp, started protesting from May 13. The protests swelled to a great extent by May 17 and major resentment among locals was precipitated after three protesters were killed, in alleged unprovoked police firing on May 17. Another woman allegedly succumbed to the injuries resulting from the mayhem following the firing, taking the toll to four according to the locals.

Sources say another reason for the protests is an apprehension that setting up of the camp will lead to harassment and exploitation of the locals.

According to sources, the camp in Silger was set up to facilitate the continuation of the Basarguda-Jagargunda road construction to make inroads into an area that is considered a Maoist stronghold. The Silger camp has been set up merely about 8kms from the site where a Maoist ambush killed 22 security personnel on April 3. One jawan was abducted and released after five days by the Maoists.

A section of activists and local journalists, who have been closely watching the developments, feels that the situation has been botched up by the forces and the administration.

They say that though this is not the first protest by locals against police camps in Bastar, normally they could always be calmed down by tactful handling and with explanations of the utility of the camps for security and development. But the firing incident has riled up the situation this time and resolution could be difficult.

Sources feel that though a section of protesters might have been propped up, partly through pressure, by the Maoists, their anger at the killings and the apprehension that the camp will disrupt their routine way of life and also lead to harassment and exploitation of innocent people, especially women by security forces, seems to be quite genuine.

While the senior police officials have maintained that fire was opened after armed cadres of Maoists tried to attack the Silger camp under the cover of the protests and that part of the protesting people were the jan militia propped up by the Maoists, the villagers and many activists have said that there was no Maoist infiltration in the protest.

After a fact-finding at Silger where they collected testimonies of many villagers, activists Bela Bhatia and Jean Dreze released a statement calling the police claim 'bizarre'. “The police claimed that peaceful protesters were somehow replaced on 17 May by a new group of 3,000 agitators, many armed, who attacked the camp with the intention of burning it down, leaving the forces with no choice but to open fire. This bizarre story does not fit with any of the testimonies we have heard. Moreover, by that time the camp had a huge presence of heavily armed personnel and any attempt to attack it was bound to fail,” the activists said.

Speaking to THE WEEK, Bhatia said the protests are not tolerated in Bastar, be they democratic or otherwise. There have been attempts to manage and sabotage a genuinely non-violent and powerful tribal protest at Silger by the district administration and police officials.

“There have been so many protests all over Bastar against so many camps in the last three years. The government has managed them all. This time one was hoping it would be different. Despite loss of lives, suffering the heat and the rain, people continued their protest peacefully. But the government seems to have no idea how to really listen to its citizens. What officials do know is how to play mean games with their rights and lives. Using the corona crisis, the government has yet again tried to manage the protests. But going by the poster that I have also received, the villagers seem to have decided to continue the protests,” Bhatia said.

Peace activist Shubhranshu Choudhary said that mass protests against security forces camps have been going on for a long time and have happened in many parts of Bastar but the firing, killing apparently unarmed people, is something that has happened after many years and something that has deeply angered the locals.

“The locals have to be given something substantive to assuage them. The government has to take some strong, tangible and prompt action and that would be to identify those guilty of firing at the earliest and give them suitable punishment. The government cannot allow the forces to feel the impunity to indulge in any action,” Choudhary said.

He also said that the CRPF sources told him categorically that their personnel were not involved in the firing (apparently the bungling up leading to firing was by the personnel of the DRG) and that the guilty should be punished. The CRPF sources were also of the opinion that the DRG personnel (comprising local youth) should be properly trained to handle the sensitive situation, Choudhary said.

He, however, said that withdrawing the Silger camp will not be a good step as it will mean stepping back of the government—something that will boost the Maoists. “But there has to be prompt action to punish those guilty of killing unarmed people,” he said.