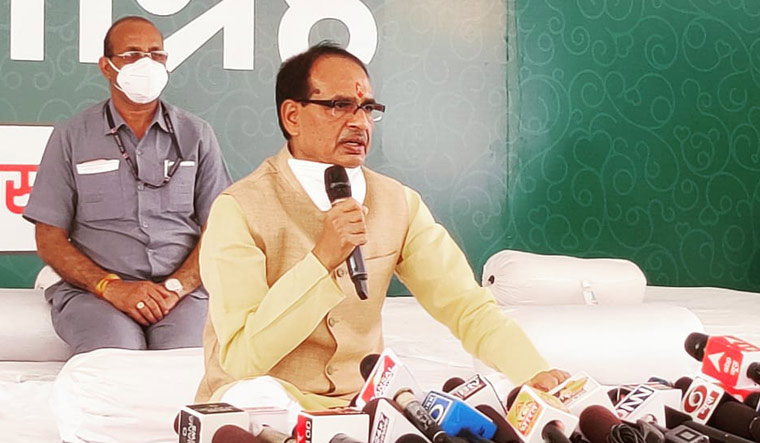 The active COVID-19 cases in Madhya Pradesh crossed 1 lakh-mark on Saturday, for the first time since the pandemic struck in March 2020. In a review meeting held in the evening, Chief Minister Shivraj Singh Chouhan spoke of looking at possibilities of importing vaccines as Russia-made Sputnik vaccines are likely to be available from June first week.

Chouhan directed smooth supply of vaccines for the 45+ age group as well as 18-44 age group people in the state. However, only nominal vaccination of the 18-44 group is being carried out due to very limited availability of vaccines. Fresh batch of vaccines is expected only after May 15 and then too, far lesser than the required number, sources said.

On Saturday, the number of active cases in the state stood at 1,02,486 with 11,598 new cases added during the past 24 hours while only 4,445 patients recovered in the duration. Also 90 deaths were reported in these 24 hours, as per the bulletin of the state health department.

Though case positivity rate had dipped significantly during the past week and has come down to 17.4 per cent at present and also the number of new cases have dipped, the number of persons recovering has been steadily going down in the duration, thus causing the active cases to spike beyond the 1 lakh-mark.

During the past week, the number of active cases that stood at 87,189 on May 1 has gone up by 15,297. As expected, the biggest contributors are Indore and Bhopal, where the active cases currently stand at 14,911 and 13,192 respectively.

Meanwhile, Congress MP from Chhindwara, Nakul Nath said in a tweet: “There aren't adequate arrangements for drugs, hospital beds, oxygen and for testing. People are queuing up for testing and treatment and getting infected. It's an appeal to Chief Minister Shivraj Singh Chouhan to ensure proper arrangements and save the state.”

The chief minister has directed that an expert panel be set-up in preparation of the expected third wave of COVID-19 pandemic. He said that the committee should study the probability of its impact on the state and also to suggest what preparations and arrangements are required to deal with it.

Chouhan has also said that the health infrastructure has to be strengthened to maximum possible level, efforts for production of Remdesivir injections in the state should be looked at, Oxygen plants should be set up at all hospitals and entrepreneurs should be encouraged to set up oxygen plants using the grants to be provided by the government.