The national capital reports marginal dip in deaths with 311 fatalities 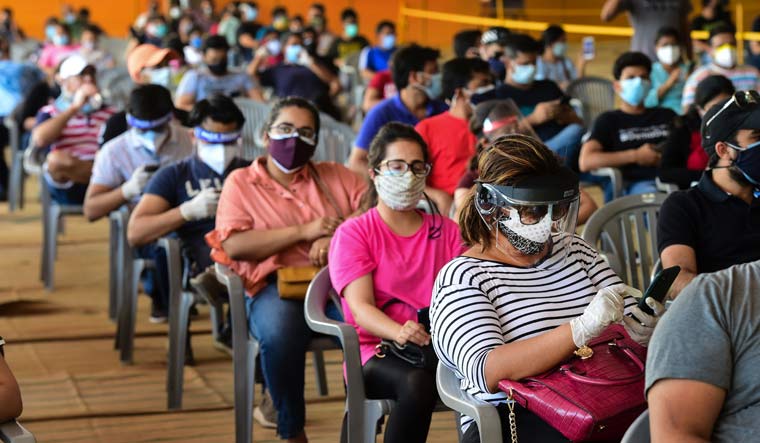 People over 18 years of age wait to receive COVID-19 vaccine doses at one of the largest vaccination sites set up by BLK-Max hospital at Radha Soami Satsang Beas grounds, in New Delhi | PTI

The national capital on Wednesday reported a marginal dip in COVID-related deaths with 311 fatalities against 338 a day earlier, while the positivity rate too dropped for the second consecutive day to reach 26.37 per cent, even as a higher number of 20,960 new infections were recorded in the last 24 hours, the Delhi Health Department said.

On Tuesday, the city had reported 19,953 new cases with a positivity rate of 26.73 per cent. Wednesday is the fourth day on the trot that the positivity rate has remained below 30 per cent.

The Delhi government claimed that all-round efforts and aggressive COVID management have resulted in a dramatic decrease in the positivity rate.

"Within just 10 days, Delhi's COVID positivity rate has reduced by 9 per cent. On April 26, Delhi reported a positivity rate of 35 per cent and on May 5, it came down to around 26 per cent," the government said in a statement.

On April 22, a positivity rate of 36.2 percent, the highest so far, was recorded.

The government said that during the last 10 days, the case positivity rate of COVID-19 has dropped by approximately 1 per cent each day.

"During these days, the Delhi government has not only ramped up testing, but also worked relentlessly in increasing the number of beds across Delhi," it said in the statement.

"The government is also giving an aggressive push to the vaccination drive, which will further help bring down the positivity rate in the coming days," it added.

Meanwhile, AAP MLA Raghav Chadha said Delhi received 555 tonnes of oxygen on Tuesday, the highest till now, as the city hospitals struggled with a shortage in the supply of the life-saving gas amid a spurt in coronavirus cases.

He also said the Delhi government received 48 SOS calls regarding oxygen shortage and cylinders not being refilled, and they were addressed.