There should be no compulsion on farmers to get tested or vaccinated: BKU leader Chaduni

'If health workers tried to force them, they won't allow them to enter protest site' 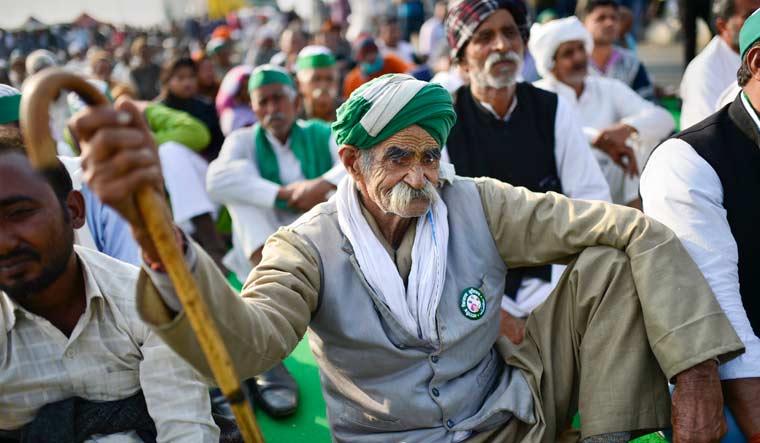 BKU leader Gurnam Singh Chaduni said protesting farmers should not be compelled to get themselves tested or vaccinated, and if health workers tried to force them, they will not allow them to enter protest sites.

A few days ago, Haryana's Home and Health Minister Anil Vij had said the farmers sitting at Haryana's borders with Delhi will be tested and vaccinated.

Sonipat, along with Gurgaon and Faridabad, is among Haryana districts which are witnessing a surge in coronavirus cases.

"If they try to force us, then we will not even allow them to enter (protest sites)," said Chaduni, adding that testing or vaccination should be left to farmers' choice.

A large number of farmers have been sitting in protest against the Centre's three new agri laws for months at Haryana's borders with Delhi at Singhu and Tikri.

Sonipat Senior Superintendent of Police (SSP) Jashandeep Randhawa told reporters that more than 1,100 farmers have been vaccinated so far.

If need be, mobile teams of the health department will be pressed into service and farmers will be encouraged for vaccination, he said.

Speaking to reporters in Sonipat on Thursday, Chaduni said a farmer will get tested for COVID-19 only if he feels sick.

He also said any farmer who is willing to get vaccinated may do so, but it should not be made compulsory.

The Haryana Bharatiya Kisan Union (BKU) leader was speaking after the Samyukt Kisan Morcha (SKM), an umbrella body of farm unions that is spearheading the agitation, met officials of the Haryana government on Thursday evening.

Chaduni, who is a key member of the SKM, further claimed that for five months, not even one farmer has died due to coronavirus at protest sites.

Meanwhile, another senior SKM leader Darshan Pal, while interacting with reporters on Thursday, said any farmer who has symptoms, will get tested for COVID-19.

He said that taking a jab should be the discretion of farmers.

Pal also said farmers who are sitting at protest sites are maintaining social distancing norms and following other protocols.

"People here are sitting in open air, this is not a slum, neither a bazaar, nor Kumbh Mela, nor an election rally. People are sitting maintaining social distance," he said.

Pal also said if anyone has symptoms, he will go home and get treatment.

He also added many farmers have died during the protest so far due to various reasons, but post-mortem report of none of the deceased showed anyone died due to the infection.