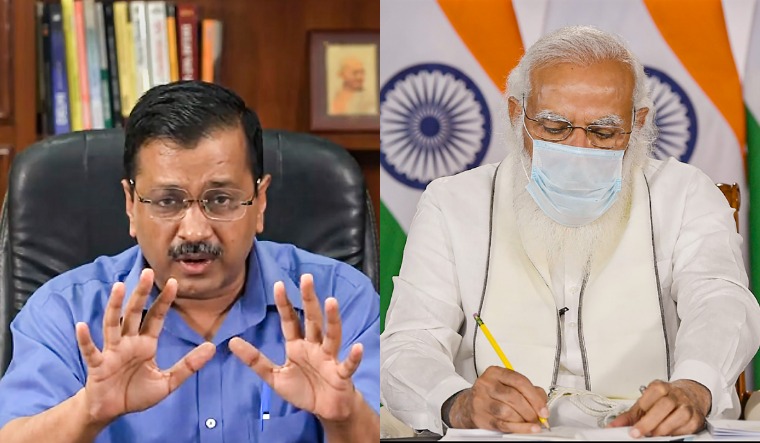 The BJP on Friday lashed out at Delhi Chief Minister Arvind Kejriwal for televising what the party described was a "private conversation" between him and Prime Minister Narendra Modi. The conversation happened as Kejriwal participated in a meeting convened by Modi of chief ministers of the 10 states worst hit by COVID-19.

In the televised discussion between Modi and Kejriwal, Kejriwal could be heard saying a "big tragedy" could happen in Delhi due to oxygen shortage.

"People in major pain due to oxygen shortage. We fear a big tragedy may happen due to oxygen shortage and we will never be able to forgive ourselves. I request you with folded hands to direct all chief ministers to ensure smooth movement of oxygen tankers coming to Delhi... Will people of Delhi not get oxygen if there is no oxygen-producing plant here? Please suggest whom should I speak to in the Central government when an oxygen tanker meant for Delhi is stopped in another state," NDTV quoted Kejriwal as saying.

Modi objected to the telecast as Kejriwal was speaking. "What is happening... this is strictly against our tradition, our protocol... that some chief minister is showing a live telecast of an in-house meeting... This is not appropriate, we should always maintain restraint," Modi was quoted as saying by NDTV. Kejriwal immediately apologised.

Kejriwal was accused of descending to a "new low" and of "playing politics using a government platform". "For the first time, private conversations of PM's meeting with chief ministers is being televised. His entire speech was not meant for any solution but for playing politics and evading responsibility," NDTV quoted a source as saying.

Following the outrage, the Delhi Chief Minister's Office explained there had been no instructions on not sharing the interaction live.

The Chief Minister's Office was quoted by ANI as saying, "Today, the CM address was shared live because there has never been any instruction, written or verbal, from Central government that the said interaction could not be shared live. There have been multiple occasions of similar interactions where matters of public importance, which had no confidential information, were shared live. However, if any inconvenience was caused, we highly regret that."