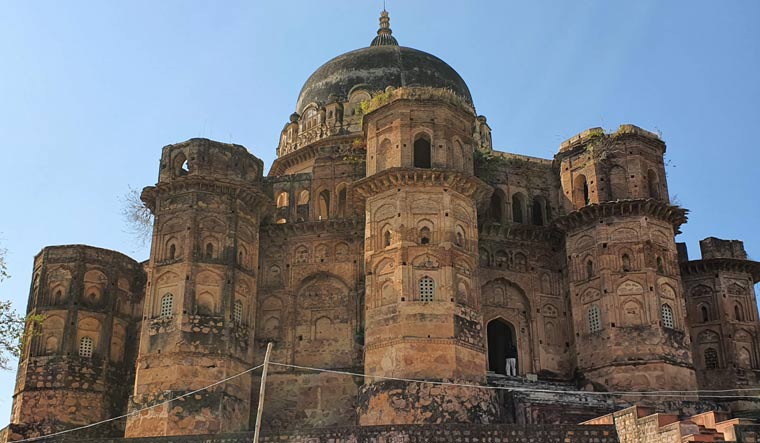 A quaint settlement with immense historical and architectural value and housing the incomplete mausoleum of warrior Bundela ruler Chhatrasal, about 16 kms from Chhatarpur district headquarters in the heart of Bundelkhand in Madhya Pradesh, is all set to regain its lost glory.

The state department of culture and tourism will be conserving and beautifying the heritage site dating 17-18th century AD at Mau-Sahania village, more popularly known as Dhubela after a palace-turned-museum and a nearby pond of the same name.

There is also a plan to include the site in the regular itinerary of the tourists to world heritage site Khajuraho, about 65 kms from the village, principal secretary of culture and tourism Sheo Shekhar Shukla told THE WEEK.

Mau-Sahania is considered the first capital of the Bundela Rajput ruler Chhatrasal (1649-1731) who revolted against Mughals and remained undefeated, having successfully warded off a final siege by the Mughals with the help of Maratha general Peshwa Bajirao I in the twilight of his life.

The mausoleum of the warrior ruler, the construction of which was started by Bajirao, however remained incomplete and it still stands so forlorn on a small hillock near the Dhubela pond, with the modern day Mukaraba village expanding right up to its base. Chhatrasal’s grandson Bakhatwali Shah constructed the upper part of the incomplete mausoleum.

The four-storey mausoleum houses beautiful Bundeli vegetal painting (done in organic colours) in the corridor surrounding the octagonal tomb of the ruler and has a touch of Maratha architecture too. However, the construction pattern suggests that there were changes of architectural plans over the years that could not culminate, in-charge conservation assistant Ashutosh Mahashabde told THE WEEK.

Apart from the Chhatrasal mausoleum, the Mau-village houses the intricately designed mausoleum of Rani Kamlapati alias Dev Kunwar, the eldest wife of Chhatrasal and was constructed by the ruler himself. This octagonal structure is a typical example of exquisite Bundela architecture with a treasure of vegetal painting adorning it. This is constructed close to the Chhatrasal’s mausoleum and is also visible from a back window of the Dhubela Palace on the other side of the pond. 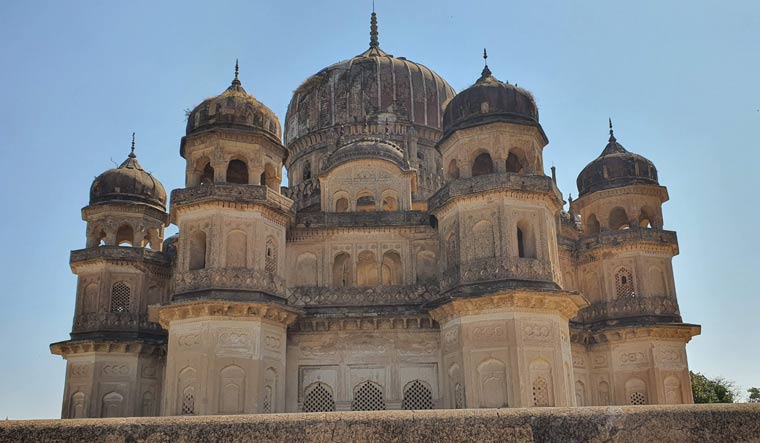 The local lore is that just like in case of Mughal emperor Shahjehan who would watch the Tajmahal from Red Fort in Agra, Chhatrasal could watch his eldest wife’s mausoleum from the Dhubela Palace, which was his Durbaar (court).

The Dhubela Palace was converted into a museum which was inaugurated in 1955 by the then prime minister Jawaharlal Nehru. It still houses very important archaeological and historical artifacts including the robe of Chhatrasal, artworks, inscriptions, weapons and an interesting laughing mirrors gallery.

One of the other interesting heritage structures in Mau-Sahania is the Mastani Mahal, which stands partially ruined just adjacent to the Dhubela Palace. Though it is not mentioned in so many words on the signage there, it is well known that Mastani was the daughter of Chhatrasal from his Muslim concubine Ruhani Begum. Mastani, also known as a brilliant danseuse, was later married off to Bajirao I, who Chhatrasal was quite indebted to. Their unique love-story was turned into a Bollywood movie in 2015.

Shukla said that the plan is to conserve, preserve and beautify the entire set of monuments at the site. Also, the museum will be upgraded by use of information technology and use of audio-visual methods. “Also, the monuments will be illuminated to give that special touch past sunset. It is an important heritage site and we plan to include it in the regular itinerary of tourists to Khajuraho,” the principal secretary said.

He said that later, the Dhubela pond could also be taken up for beautification and water sports activities could be started there, along with trekruler opportunities on nearby hillocks for the more adventure-spirited.