BJP has become medium to bring transformation in country: Nadda to workers

Those who got an opportunity to join the BJP, I consider them as fortunate, he said 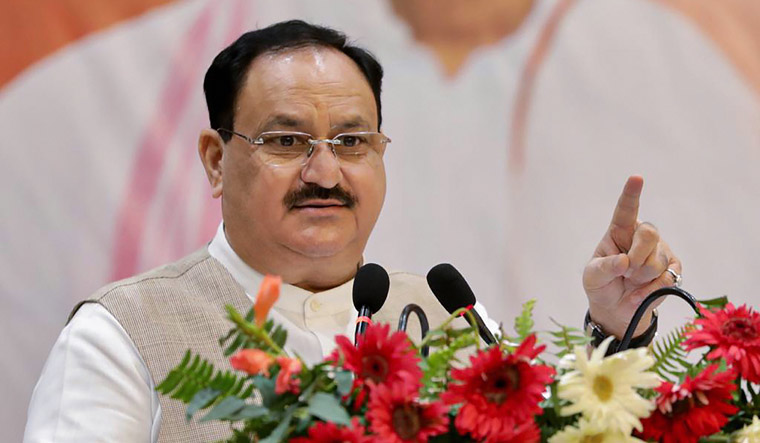 BJP national president J.P. Nadda, on Sunday, said the party has become a medium to bring transformation in the country and take it to great heights.

The BJP chief was in Varanasi to inaugurate a newly built party office. He inaugurated another office in Allahabad through video conferencing.

Addressing party workers, Nadda said, "I congratulate the organisers who have built this office. But friends, this is hardware. The software which we have to install in this is our workers. This office will become a medium to inculcate best quality values."

The BJP chief also stressed that grabbing power is not their target but a medium to reach out to the the last man in the line.

Nadda, who is on a two-day visit to Varanasi, said to run an organisation, workers, executive body, programme and office are needed.

Those who got an opportunity to join the BJP, I consider them as fortunate. The party has become a medium to bring transformation in the country and take it to glorious heights," he said.

Taking a dig at the Opposition, he said all parties in the country have become parties of families. "But in the BJP, it is the party that has become a family," he said.

Nadda also claimed that the BJP has never seen a downfall since the days of the Jana Sangh.

Recalling his college days, he said, "People used to say that Nadda, you are a right person in the wrong party. I used to say that there is nothing right or wrong. If principles are right, then we will prove to be right today or tomorrow. Today, I ask them who is right? who is wrong?"

In a reference to the Left parties, the BJP chief said, "Our Comrade friends used to say Nadda, there will be a revolution. I used to tell them that India is a country of saints. Evolution takes place here, not revolution. This thing has to be understood.

The BJP chief told party workers that they aim to build 80 offices in the state, of which 53 have been built and by October, the remaining will be ready.