NIA charge-sheet in Bengaluru riots case an RSS ploy to target us: SDPI 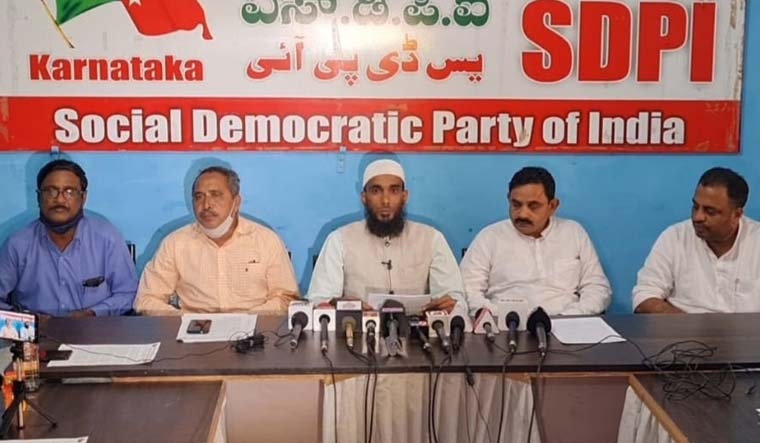 The National Investigation Agency's charge-sheet in the Bengaluru riots case is "pre-guided" by the Sangh Parivar to "target" and "fix" the Social Democratic Party of India (SDPI) in the case, alleged Majid Khan, vice president of the SDPI Karnataka unit.

The National Investigation Agency probing the Bengaluru (DJ Halli) riots case had submitted a 7,000-page charge-sheet on February 24, 2021, against 247 persons under the Unlawful Activities (Prevention) Act and various sections of the Indian Penal Code and as many as 47 people named in the charge-sheet are allegedly linked to the Popular Front of India (PFI) and the Social Democratic Party of India.

On August 11, 2020, riots had broken out in Devarajeevana Halli and Kadugondana Halli areas of Bengaluru following a Facebook post by Naveen, nephew of Akhanda Srinivas Murthy, a Congress MLA representing Pulakeshinagar. The mobs attacked the MLA’s house and the KG Halli police station before resorting to vandalism in the two localities.

During a press meet on Friday, the SDPI leaders demanded an impartial probe into the case by a High Court justice, stating the NIA had taken up the case and filed the FIR even as the Central Crime Bureau was still investigating the case.

"The Centre sent the NIA under pressure from the Sangh Parivar. In fact, the Bengaluru CCB charge-sheet had stated that there is a political conspiracy to defame sitting Congress MLA Akhanda Srinivas Murthy and named former mayor and Congress leader Sampath Raj, some Congress corporators and JD(S) and SDPI leaders as the masterminds of the violent incidents. But the NIA has given them a clean chit," said Khan.

The NIA charge-sheet had named Feroz Pasha, Mohammad Sharif and Mujamil Pasha as the main accused and had noted the violence was not spontaneous and the plotters behind the riots were aggrieved over the Citizenship (Amendment) Act and the National Register of Citizens, according to media reports.

Alleging the NIA probe smacked of "religious discrimination”, Khan said, "In the last six months, NIA has probed 2,000 persons, mostly locals and a few leaders from the Congress, JD(S), AAP and SDPI. The charge-sheet mentions that both Fairoz, a former Congress leader now in AAP, and Naveen, a Sangh Parivar activist, used to post anti-religious statements regularly on social media. And that Naveen had posted a derogatory post against the prophet [Mohammed] in response to a post by Fairoz. However, Naveen is on bail now as he was charged under IPC, but Fairoz and other Muslim youths have been charged under UAPA. There is no UAPA case against Sampat Raj and other Congress corporators, who are the masterminds. Even Srinivas Murthy believes Sampat Raj is behind the conspiracy."

Citing the investigation report released by retired justice Nagamohan Das on the Bengaluru violence, Khan said, "The report clearly mentions the main cause of the violence was the failure of the state government, its intelligence department. It also mentioned that investigating agencies were targeting SDPI and people of a particular community."