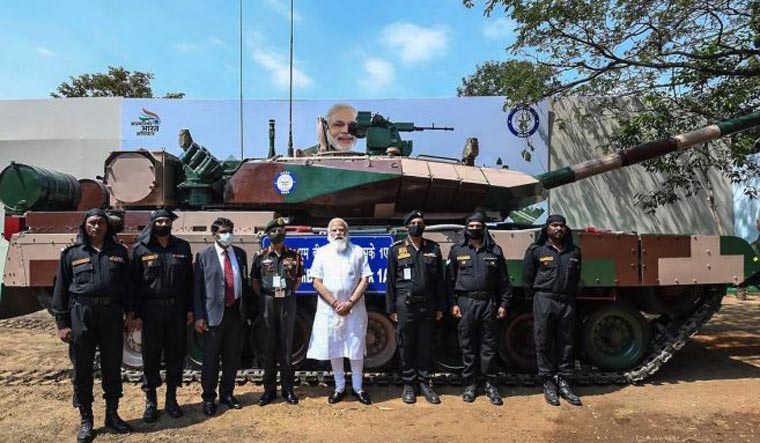 The 118 Arjun Mark-1A tanks, with 71 “upgrades” for better firepower, mobility, protection and endurance, will cost Rs 8,379 crore to the Indian Army. The new, improvised Arjun tanks will be manufactured by the Defence Research and Development Organisation's (DRDO) Combat Vehicles Research and Development Establishment in Chennai, in collaboration with 15 academic institutions, eight laboratories and numerous other MSMEs. These MBTs will eventually join the first 124 Arjun tanks inducted by the Army over a decade ago and are deployed in the western desert along the Pakistan front.

"Three Acceptance of Necessities (AoNs) for an overall cost of Rs 13,700 crore were accorded. All these AoNs are in the highest priority category of Defence Acquisition viz 'Buy Indian-IDDM (Indigenously Designed, Developed and Manufactured),” according to a MoD statement, issued after the meeting.

MoD also added that all these acquisition proposals will be indigenously designed, developed and manufactured. "These will include inter-alia platforms and systems designed and developed by DRDO," MoD further stated.

According to official sources, weighing 68 tonnes, the upgraded Arjun Mark-1A is being compared to the Russian-made T-90S 'Bhishma' tanks that currently form the bulk of India's armoured vehicle regiments. The upgraded Arjun is equipped with a 120mm main gun, and the 118 tanks would also form two regiments in the Armoured Corps of the Indian Army.

Incidentally, Indian Army had already placed order for 464 T-90S tanks. Presently, Indian Army has over 1,100 Bhishma tanks and some of them are deployed on the high altitude terrain of Ladakh as well.

The MoD official maintained that to meet the Atmanirbhar Bharat goals on time-bound defence procurement process and faster decision making and to systematically work towards reducing the time taken for capital acquisition, the DAC also approved that all capital acquisition contracts (delegated and non-delegated) shall be concluded in two years.

"The ministry, in consultation with the services and all stakeholders, will come up with detailed plan of action for achieving the same," official added.