Disengagement in eastern Ladakh is surrender to China: A.K. Antony 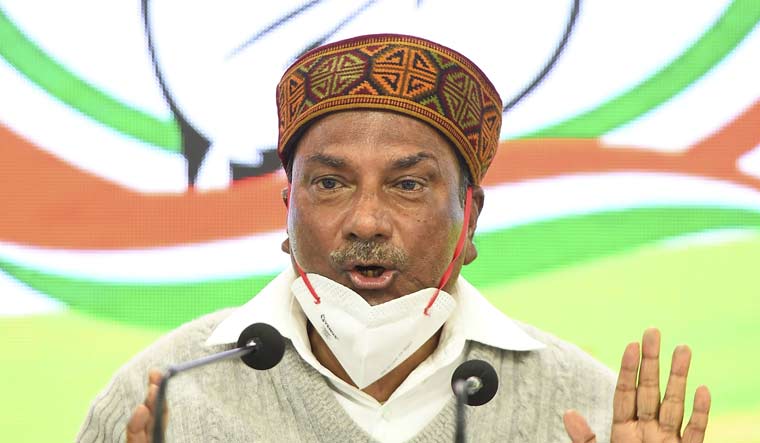 Senior Congress leader and former defence minister A.K. Antony on Sunday alleged that disengagement in both the Galwan Valley and Pangong Tso Lake areas and the creation of a buffer zone was a "surrender" of India's rights to "appease" China.

Addressing a press conference, he said that at a time when India was facing multiple challenges at the border and was facing a two-front war-like situation, the increase in defence budget this year was "meagre and insignificant" and was a "betrayal" of the country.

He alleged that India is "appeasing" China by agreeing to disengagement and by not increasing the defence budget.

The government had on Friday emphatically stated that India has not "conceded" any territory following the disengagement agreement with China in the Pangong Tso Lake area in eastern Ladakh.

Antony along with Congress chief spokesperson Randeep Surjewala posed a set of questions to the government asking why it has withdrawn from patrol point 14 in the Galwan Valley to Finger 3 in Pangong Tso lake and created a buffer zone in Indian territory.

They also asked why the government has agreed to withdraw from the strategically important Kailash ranges on the southern bank of the Pangong Tso Lake.

Antony said he was sad that the Narendra Modi government was not giving proper priority to national security at a time when China was getting belligerent and Pakistan continued to promote terrorism.

He said disengagement was good as it reduced tension but it should not be done at the cost of national security.

"Both disengagements in Galwan and Pangong Tso are a surrender," he alleged, adding that it amounted to surrendering of areas traditionally controlled by India.

"We are surrendering our rights," he alleged, noting that Galwan Valley as Indian territory was never a disputed land even in 1962.

"Disengagement and buffer zone means surrender of our land, at the moment. Now, we cannot go there. They put sensors there," he alleged while warning that the government is not understanding the importance of this disengagement and creation of the buffer zone.

Antony alleged that the government did not increase the defence budget to "appease" China and to give a message that it did not want to confront them.

"To appease China, the government sent a message by not increasing this defence budget that we do not want to confront you. To appease China, we have agreed to disengagement on China's terms," he alleged.

He warned that China can play mischief anytime by helping Pakistan in Siachen.

"We want to know from this government when there will be status quo ante as in mid-April 2020 in the entire India-China border," he said, asking what was the government's plan in this regard.

He also said the government must take the country and the people into confidence on restoration of the status quo ante at the borders.

He said the government always consulted leaders of all political parties before taking such a decision and must keep national security in mind.

When the whole country is facing serious challenges from both China and Pakistan, the senior Congress leader said the armed forces are demanding support and substantial increase in the defence budget.

"But compared to last year's revised defence budget, this budget has made a meagre and insufficient increase of only 1.48 per cent. It is a betrayal of the country. The government has let down our armed forces. The government is not paying proper attention to national security," he further charged.

"It is time the government must support the armed forces," he demanded.

The senior Congress leader said the Chinese army is building up along the LAC and incursions are taking place occasionally, including the setting up of a village in Arunachal Pradesh.

"One thing is very clear that the entire India-China border needs 24x7 attention and our armed forces are ready for that, but need the government's support.

"The Chinese are mobilising the army, the armed forces, building infrastructure and consolidating their position. So, we also need matching support to the armed forces," he noted, adding that of late danger in the Indo-Pacific is emerging as the Chinese Navy is showing its muscle.

Antony and Surjewala also paid homage to the soldiers who died in the Pulwama attack and said the entire party and nation will remember their sacrifice and hoped that it will not go waste.