Why is he bent upon falsely claiming that disengagement is a loss for India: Nadda 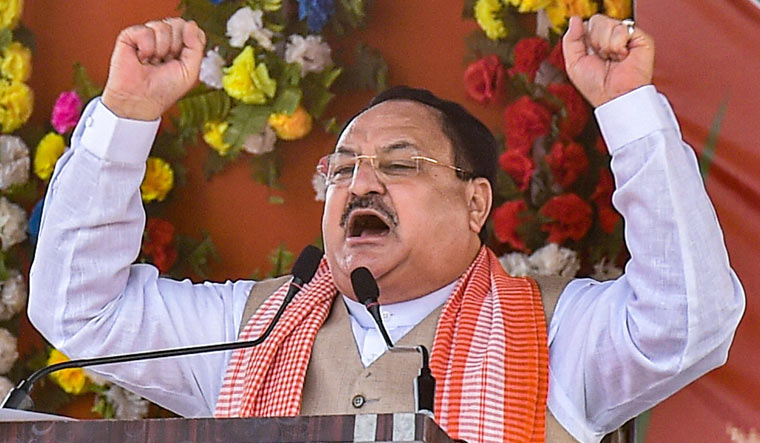 The BJP, on Friday, lashed out at Rahul Gandhi for his allegation that Prime Minister Narendra Modi has ceded territory to China with its president J.P. Nadda dubbing the charge as "false" and questioning if it is not an insult to the armed forces who are leading the disengagement strategy.

Nadda dubbed Gandhi's presser in which he attacked Modi as a "new edition of Congress circus".

"Why is he bent upon falsely claiming that the disengagement is a loss for India? Is it a part of INC-China MoU?" the BJP leader asked in a tweet.

Gandhi, on Friday, alleged that the prime minister has "ceded" Indian territory to the Chinese, and questioned the government over its agreement with China on disengagement of troops in eastern Ladakh.

"This is absolute 100 per cent cowardice. This is nothing else. The prime minister is a coward who cannot stand up to the Chinese...He is betraying the sacrifice of our army," he charged.

Hitting back, Nadda said, "A new edition of Congress circus today, again due to Mr. @ Rahul Gandhi. Why is he bent upon falsely claiming that disengagement is a loss for India? Is it a part of INC-China MoU? With the armed forces leading the disengagement strategy, isn’t this an insult of our brave forces?"

He also posted a couple of media reports and a video message of a former Indian Air Force officer to allege that the Congress-led UPA government did not trust the armed forces and vice versa.

"No Indian land has been given up by the government as part of the current disengagement process. If anyone committed the sin of giving up thousands of sq km, it is one corrupt, cowardly dynasty that has broken the country to keep their power intact," he said, attacking the Nehru-Gandhi family.

He said the "nation cannot forgive the Gandhi family for losing 43,000 sqkm of land to China".

"When one does not have a moral conscience, when one cannot contribute anything positive, one resorts to lies. Rahul lied left, right and centre. Perhaps Rahul is depressed that he could not become PM. He knows that even his shadow won't support him and can't digest the huge public mandate to PM Narendra Modi," Joshi said.

With Gandhi making his attack on Modi personal, Joshi alleged that the former Congress chief's "utterances" are based on far-fetched presumptions and create "serious doubts on his mental health".

"The selective amnesia which Rahul often displays seems a regular order. Denigrating efforts and sacrifices of our security forces, whom you are placating? Why? Because you got some donation for your party? Can't forget your meeting with the Chinese?" he said in a social media post.

"Congress party breeds a culture of petty politics. Every member of the Gandhi family always leaves behind a legacy of misdeeds. History bears testimony to their repeated attacks on the sovereignty of the nation and unfortunately it is the country that has to always suffer," Joshi said.

The nation cannot forgive the Gandhi family for losing 43,000 sqkm of land to China, he said, noting that Pakistan has also illegally ceded 5,180 sqkm of Indian territory in Pakistan-occupied Kashmir (PoK) to China.

In a tweet, BJP general secretary C.T. Ravi said, "I am glad that the Congress has finally realised that PM Nehru created a 'Himalayan Blunder' by gifting 38,000 sq km land to China. Will it also question its co-owner, the coward Rahul Gandhi for making baseless allegations against PM Modi?"