Did the Gandhis reward Kharge's loyalty by naming him LoP in Rajya Sabha? 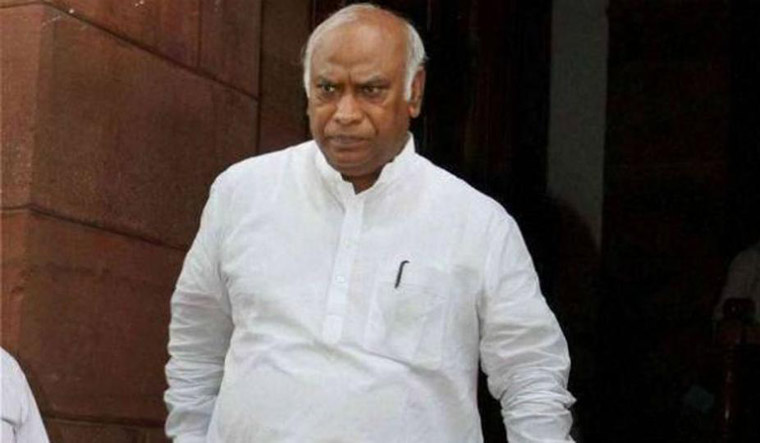 The political messaging, for both in-house audience as well as rivals, was unmistakable as senior leader Mallikarjun Kharge was today named by his party for the post of Leader of Opposition in the Rajya Sabha.

The 78-year-old leader is all set to succeed Ghulam Nabi Azad as the LoP in the upper house after his party sent his name for the post to the Rajya Sabha Chairman. The transition, while it was much expected, re-emphasises the divide in the party.

A tall Dalit leader, Kharge is learnt to have won the admiration of the Gandhis for the aggressive manner in which he had taken on the ruling dispensation in the Lok Sabha in the previous term as the Congress's leader in the house, despite his party having been reduced to just over 40 members. His party had then been extremely critical of the Narendra Modi government for not having given him the post of Leader of Opposition in the Lok Sabha. The Congress did not meet the criteria of having a minimum of MPs to get the post, but the party said the government should have respected convention by giving the post to the leader of the single largest party in the opposition grouping.

After he faced his first electoral defeat in his political career in the Lok Sabha elections in 2019, Kharge was nominated to the Rajya Sabha, setting off speculation that he could replace Azad, who represented Jammu and Kashmir in the upper house, as the LoP after his tenure came to an end on February 15.

Kharge's nomination as LoP is also significant since it comes in the backdrop of the divisions in the Congress coming to the fore, with 23 senior leaders having written to party president Sonia Gandhi seeking an overhaul of the party and stressing the need for a full-time, effective and visible leadership. Kharge appears to have been rewarded for his loyalty, whereas there is no certainty if Azad will be renominated to the upper house from Kerala, where three seats fall vacant in April. Also, Azad's deputy in the house Anand Sharma, also amongst the signatories of the 'letter of dissent', was ignored for the post of LoP.

The Congress could also have signalled, by naming Kharge as the LoP, that it would follow aggressive tactics in the Rajya Sabha. The Karnataka leader had, in the previous Lok Sabha, led his partymen in constant run-ins with the treasury benches, raising slogans and disrupting the proceedings.