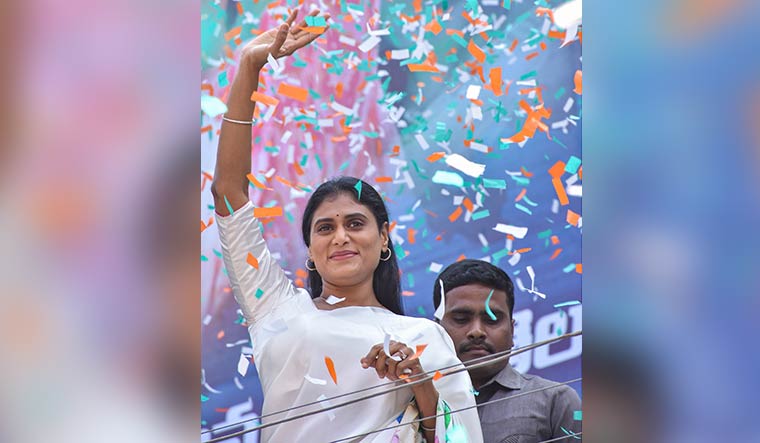 Y.S. Sharmila, daughter of former Chief Minister Y.S. Rajasekhara Reddy, waves at her supporters in front of her residence in Hyderabad | PTI

During her Padayatras (walkathons) of 2012 and 2013—political journeys aimed at strengthening the YSR Congress Party (YSRCP) and started by her brother and present AP CM, Y.S. Jagan Mohan Reddy—she would often say this line. Translated, it means she is the arrow released by Y.S. Jagan.

While the bow is firmly placed in Andhra Pradesh, the arrow has now landed in Telangana.

In a significant development, Y.S. Sharmila, usually seen only during election campaigns pitching for her brother, has decided to venture on her own, politically. While Y.S. Jagan’s YSRCP has taken a strategic decision to limit itself to AP and become inactive in Telangana, Sharmila has set her eyes on Telangana.

On Tuesday, she held meetings with supporters and loyalists of her father at her residence in Hyderabad. The scenes witnessed at the venue was a clear give-away that a new regional party is on the cards. Huge posters with images of Sharmila with folded hands greeted the visitors. The meeting generated a lot of hype as media persons and a good number of people reached her residence. Around noon, she stepped out to a confetti shower and cheered. Later, while addressing the media, she stressed the need to have better governance in Telangana, like the one promised and delivered by her father during his tenure (2004-2009).

She said that she was only meeting the family’s supporters to understand ground realities in the state but remained non-committal on the issue of starting a party. She said she will convey her decision in the coming weeks. It is, however, clear, that she will not start the new innings under the YSRCP banner. Her enthusiastic supporters said that she is going to be the next CM of the state.

Sharmila's decision to make a political entry on her own has surprised many. She never contested any elections but remained politically active only during elections and important occasions. Post the general elections in 2019, she slipped back to her normal life without taking up any key role in the government or the party.

“There is a difference of opinion between them (Jagan and Sharmila) in political context. But there are no personal problems between the family members,” said S. Ramakrishna Reddy, political advisor to the CM of AP and a senior party leader immediately after Sharmila convened a meeting.

According to him, Y.S. Jagan was against strengthening the party in Telangana as it would be detrimental to the interests of the state he was ruling. However, Sharmila thought otherwise and felt a need to explore the need to remain relevant politically even in Telangana, he said. He made it clear that neither the party nor the family was in favour of Sharmila venturing into the Telangana political arena.

Though the Y.S. family hails from the Rayalaseema region of Andhra Pradesh, YSR enjoyed great support in Telangana. Sharmila's decision has enthused the leaders and cadre of Telangana YSRCP which was almost non-functional.

This political development in Telangana unfolds at a crucial time: The ruling TRS party, which completed two years of its second term, is not as popular as it was after losing a by-election and failing to secure a Mayor seat in Greater Hyderabad elections. The BJP is gaining strength and is occupying the post of the principal opposition party.

The biggest loser, should Sharmila start a party, will be the grand old party. Already in a very weak state, due to political migrations and poor performance, the Congress—which takes pride in the legacy of YSR and his schemes—will have a strong competition in the form of YSR’s family member.

According to sources, Anil Kumar, Sharmila's husband, is in touch with state Congress leaders. If there are any more desertions in the Congress camp, then it will be a deathblow to the party.

Questions are also being raised on how Sharmila plans to sustain political momentum over the next three years until state elections are due again. For now, Sharmila is learnt to be gearing up to tour various districts of Telangana to muster up support.