Nine trees were planted to mark inauguration of the mosque's construction 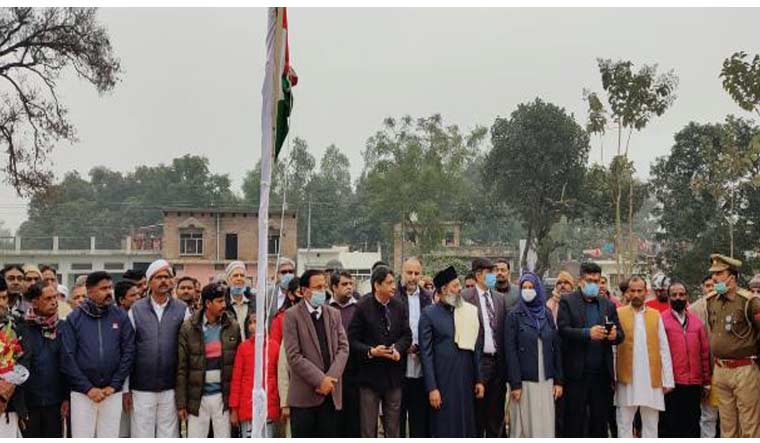 Nine trust members— nine trees— that simple act marked the foundation laying ceremony of the Dhannipur Mosque Complex. Any allusions to the word ‘grand’ or its approximations were missing.

Members of the Indo-Islamic Cultural Foundation (IICF) assembled at the five-acre piece of land in Dhannipur at 8.15 am. Scores of residents from the villages of Dhannipur and Raunahi— which are woven into each other, also joined in for an enthusiastic rendition of the national anthem.

While six trustees were present at the site, four could not come due to old age or health-related issues. The saplings planted in their names included those of jackfruit, guava, mango, tamarind mulberry and cinnamon.

Athar Husain, the spokesperson said, “The idea was to have trees which would not just give shade, but also which would yield fruit at a later date”.

Some special invitees were also present at the site. They included Ikramullah CFO, Maulana Wasifur, Rehman Co-Mutawwali of the Tiley Wali Masjid, Shoaib Ahmed- a philanthropist, Zarim Navid— the Trust’s counsel at the Supreme court of India, Islamic scholar Shazia Fakhr and Rohit Srivastava— an employee of the Lucknow University who was the first to make a donation to the complex.

Sweets were distributed after the ceremony. The Trust members were also extended a courtesy call by the District Magistrate who hosted the delegation for tea.

With the mosque aiming to be a completely new beginning, untainted by the troubles of the past, those who came for the ceremony chose ‘development’ as the most important attribute that would flow out of the building when complete.

Soil testing of the area is on with an expert team collecting samples from every possible spot to test for strength, enmity and water content.

Some sections of the media have been reporting that the income tax and subsequent FCRA donation clearances that have to be made before the IIFC can start accepting donations from abroad are deliberately being delayed,

Husain dismissed these speculations as ‘mischievous’.

“The income tax department is taking whatever time is required to verify all the details. There is no reason for us to believe that there are any deliberate delays”.