India vaccinates more than 15 lakh people in a week

More than 1.4 lakh people got the shot on Saturday 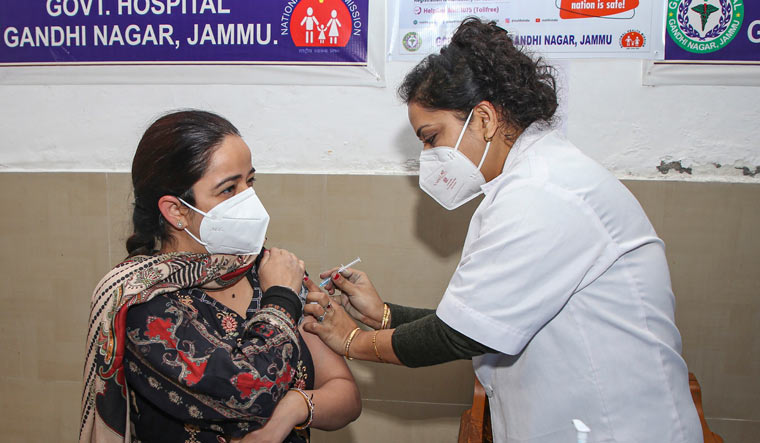 A medic administers COVID vaccine to a doctor in Jammu | PTI

A week into India's COVID-19 vaccination drive that began on January 16, over 15 lakh healthcare workers have received their first shot. Currently, two vaccines—Serum Institute of India's Covishield and Bharat Biotech's Covaxin—are being administered. Twelve states are giving Covaxin shots, and from the next week, seven others would be added to this list, according to the Union health ministry. These states are—Chhattisgarh, Gujarat, Jharkhand, Kerala, Madhya Pradesh, Punjab and West Bengal.

Vaccinators and programme managers in these states were trained in implementation protocols on Saturday, the ministry said. Covaxin is being given in "clinical trial mode" in the country as Phase 3 efficacy data is awaited.

According to Bharat Biotech, those with any history of allergies, or those who have fever, a bleeding disorder or are on blood thinners, immune-compromised, pregnant, or breastfeeding, or have any other serious health related issue are advised not to take the vaccine.

The health ministry has said that only 0.0007 per cent people have recorded hospitalisation against vaccinations. Six deaths have been recorded in the last week, none of which are causally related to vaccination, it said. These deaths have been reported in Moradabad, Bellary, Shivamoga, Nirmal, Gurugram and Chittorgarh.

On January 23 (until 6 pm), as many as 1,46,598 persons got the shot, the ministry said. A total of 11 persons have been hospitalised so far while 123 adverse events following immunisation (AEFI) were recorded. Over the last 24 hours, one person has been hospitalized at government hospital, Guntur, Andhra Pradesh. The vaccinee received the shot on January 20. A death, too, has been reported.

"In the last 24 hours, one person aged 56 years who was a resident of Gurugram, Haryana has died. The post-mortem confirms that cardio-pulmonary disease was the reason for her death and it was not related to vaccination," the ministry has said.

The first death that was reported in the current vaccination drive was also attributed to "cardio-pulmonary disease" and was said to be not linked to vaccination. The death that took place in Moradabad, UP, was that of a 52-year-old man, who was vaccinated on January 16. The post-mortem report had indicated pus in lungs, and an enlarged heart. Experts had said that the development of pus in completely normal lungs within a day after vaccination was very unlikely. However, vaccinators have to ascertain basic facts such as whether an individual is ill or not at the time of planned vaccination.

While adverse events following vaccination are to be expected, what is important is to gauge how serious those events are. The challenge of finding whether a serious event, for instance, a death, depends on the case in question. "There are situations such as extreme allergic reactions where a trial drug or vaccine leading to death can be robustly inferred," said Dr Satyajit Rath, immunologist and former professor at the National Institute of Immunology.