Those excluded from NRC but on rolls can vote in Assam: EC 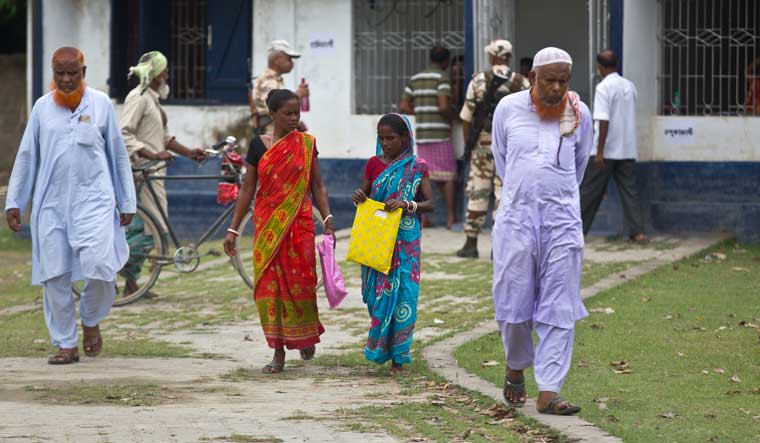 A day after the Election Commission made it clear that those excluded from the NRC will be eligible to vote in the upcoming assembly polls if their names figured in the voter list, the ruling BJP on Thursday said status quo about their voting rights has to be maintained while the Congress and the AIUDF welcomed the decision.

The final NRC, a database of Indian citizens living in Assam which was updated under the supervision of the Supreme Court and published on August 31, 2019, excluded names of over 19 lakh of the 3.29 crore applicants.

However, it has not been notified by the Registrar General of India yet. This leaves the document without any official validity.

Chief Election Commissioner Sunil Arora, citing a Union Home Ministry order, said here on Wednesday that those excluded from the final NRC can vote in the assembly polls if their names are there in the published electoral rolls.

"Lakhs of Indian citizens were excluded in the NRC but names of many illegal immigrants are there in it. The NRC document in its present form has not been accepted by the party and we have asked for a re-verification.

"Till it is done, status quo has to be maintained as the notification is yet to be issued," BJP Assam unit president Ranjeet Dass told PTI.

National Register of Citizens (NRC) and Citizenship Amendment Act (CAA) are expected to be major issues in the state polls.

Many cases had surfaced where a person was a voter in Assam for a long time but did not find place in the NRC list.

State Congress spokesperson Bobbeeta Sharma said that names of many genuine Indian citizens were left out of the final NRC.

"The EC has taken the right step in allowing them to vote. Otherwise, their democratic rights would have been infringed upon," she said.

The All India United Democratic Front (AIUDF), an alliance partner of the Congress for the assembly polls due in March- April, also welcomed the EC's decision describing it as "a positive move".

AIUDF General Secretary Aminul Islam said, "We also want a permanent solution to the problems of Doubtful or D-voters which exists only in Assam. We requested the Election Commission that doubtful voters should be allowed to vote unless they have been declared as foreigners," he said.

D-voters are those who could not provide evidence in favour of their Indian nationality.

Altogether 83,008 cases of doubtful voters are pending in the Foreigners Tribunals in Assam while 86,756 others were declared as foreigners in the last five years, the government informed the Lok Sabha in September last year.

Lurinjyoti Gogoi, president of the newly formed Assam Jatiya Parishad, however, said that those excluded from the NRC should not be allowed to vote as it will only lead to the advantage of some political parties.

Gogoi, as general secretary of All Assam Students Union (AASU), was a petitioner in the Supreme Court seeking to remove discrepancies in the NRC.

After publication of the final NRC, almost all the stakeholders and political parties had criticised it as a faulty document, alleging exclusion of indigenous people and inclusion of illegal migrants.