Government is ready to hold talks with an open mind, says Tomar 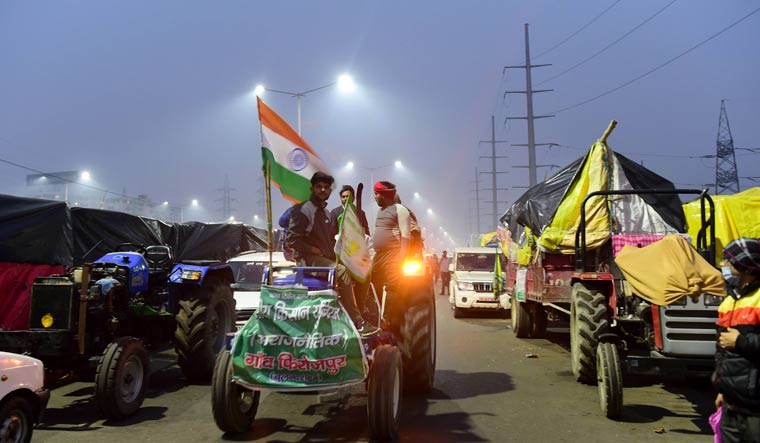 The ninth round of talks between the government and the protesting farmers to end the impasse over the contentious agri laws will take place on Friday with Union Agriculture Minister Narendra Singh Tomar expressing hope that the discussion would be positive.

Tomar said the talks between the government and the union representatives will take place as scheduled at 12 pm on January 15.

"The government is ready to hold talks with farmers' leaders with an open mind," he said.

The farmer unions have informed that they would attend the meeting while asserting that it is necessary to continue the dialogue to resolve the deadlock and end the agitation.

"Let's see what happens tomorrow. But, our meetings will continue with the government till our protest ends as it is necessary," Bharatiya Kisan Union (BKU) leader Rakesh Tikait said.

The previous eight rounds of negotiations had failed to end the deadlock with the protesting farmers insisting that they would not settle for anything less than the repeal of new agriculture laws.

The fresh round of talks comes in the backdrop of the Supreme Court staying implementation of the new laws and appointing a four-member committee to resolve the impasse on January 11. One of the members of the committee, Bhupinder Singh Mann, who is also the president of the BKU,  recused himself from the panel on Thursday.

The committee also comprises Shetkari Sanghatana (Maharashtra) president Anil Ghanwat, International Food Policy Research Institute's Pramod Kumar Joshi and agriculture economist Ashok Gulati. The committee was to submit its report to SC within two months from the date of first sitting, which shall be held 10 days from January 12.

The protesting farmers' unions, meanwhile, welcomed Mann's decision to recuse himself from the panel and urged the other three members to follow the suit, while reiterating that they do not want any panel.

The protesters said they would not settle for anything less than the repeal of new agriculture laws.

"Mann's decision is a good step as there is no importance of any committee for farmer unions as it has not been our demand. Mann knew that no farmer union would appear before the court-appointed committee that's why he has taken this decision," Gurnam Singh Chaduni, senior member of the Sankyukt Kisan Moarch, told news agency PTI.

Chaduni said the farmer leaders would not appear before the committee even if new members are appointed.

Thousands of farmers, mostly from Punjab and Haryana, have been camping at several Delhi border points, demanding a complete repeal of the three farm laws and legal guarantee of minimum support price for their crops.

However, the protesting farmers have expressed their apprehension that the new laws would pave the way for eliminating the safety cushion of the MSP and do away with the "mandi" (wholesale market) system, leaving them at the mercy of big corporates.