Beyond its neighbours, India has extended this friendship benefit to Africa 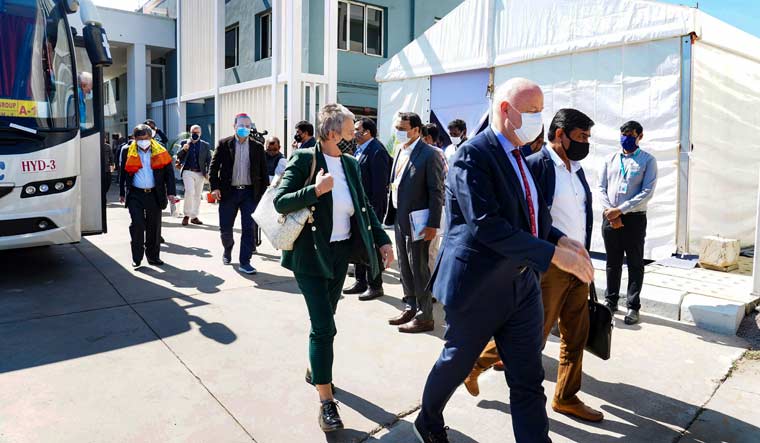 Envoys from various countries arrive at Bharat Biotech to review the development of COVID-19 vaccine, in Hyderabad | PTI

The vaccine race has heated up. Offering the possibility of life beyond the pandemic, the vaccine has also emerged as the biggest tool for diplomacy. Russian President Vladimir Putin grandly offered the Sputnik V free to all the UN employees and China has sent 1.2 million doses to Indonesia, but India is likely to overshadow any effort and emerge the leader.

There are various reasons. Not only because India has a super-hero complex. Vikas Swarup, Secretary, West, said at the SCO Council of Heads of Governments in October: “We want our vaccines to be used for the global good.’’  India is offering its fringe benefits for friendship: access to the Covid vaccine for free. Nepal has been offered vaccines as has Afghanistan; Myanmar was made the same offer when Foreign Secretary Harsh Vardhan Shringla visited that country as well as Bangladesh.

There is competition too. Like PPE kits, China is also gearing up its vaccine to be part of its diplomatic read propaganda machinery. Indonesia received 1.2 million doses of the vaccine developed by a Chinese company on Monday; more follows later in January. Pakistan is also likely to get doses from China. Russia is also offering countries its vaccine.

Beyond its neighbours, India has extended this friendship benefit to Africa. There is a commitment to provide countries in Africa vaccines at a subsidised rate. And India is showcasing its ability. On Wednesday, sixty-four envoys across the world are on a visit to Hyderabad—which is emerging as a hub to develop the vaccine.

The envoys who were masked and with shields were taken to Bharat Biotech and Biological E to give them a first-hand experience of India’s ability.  "The future has arrived," tweeted Danish Ambassador Freddy Svane on his vaccine-facilities tour organised for foreign diplomats. His tweet summed up exactly what India is hoping to do. The trip organised by the ministry of external affairs was to add weight to India's claim of global good.

India's vaccine generosity has emerged as a priority in South Block. Certain missions were reluctant to send their top diplomats on the trip—worried about exposure to the virus—but cajoling by the MEA ensured that everyone was on board. And to quote Svane via Twitter again, “#India injects hope to humanity—visiting the Genome valley-hub for vaccines’’. This is likely to be the first in many such trips.

But beyond the close neighbourhood and the SAARC framework, India is likely to have an edge in the race as it has been at the centre of mass manufacturing. "India has a big role to play, not only because of its population, but we know that India has a very very important vaccine manufacturing industry," Dr. Jerome Kid, an authoritative voice on vaccines, had said to a news channel in April. “About 70 per cent of the vaccines used around the world for extended immunization programmes are made in India. Almost every child in the world has received a vaccine, made in India and that’s really important," the doctor had said.

India has become one of the world’s largest buyers of vaccines with 1.6 billion doses. There will be a little bit of India in vaccines that go out too. Apart from the Chinese, of course. Especially as India has also tied up with countries for human trials. The vaccine Putin has offered to the UN employees is undergoing human trials in India. In this race, all roads lead to India.