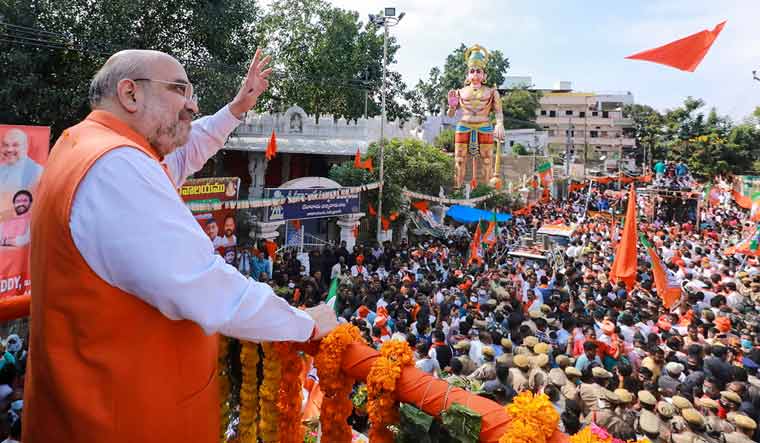 Union Home Minister and top BJP leader Amit Shah on Sunday assured that the party would make Hyderabad a global IT hub, a modern city and free from "Nizam culture"if voted to power in the December 1 civic polls.

He also exuded confidence that Hyderabad would have a BJP mayor after the GHMC polls and that the saffron party would form the government in Telangana after the next assembly elections.

Addressing a press conference here on the last day of campaigning for the Greater Hyderabad Municipal Corporation (GHMC) elections, Shah appealed to the people to give an opportunity to the BJP and said his party would make ready all infrastructure to ensure Hyderabad becomes a global IT hub.

He promised good governance and implementation of Prime Minister Narendra Modi led government's policies in Hyderabad as he accused KCR (as Telangana Chief Minister K. Chandrasekhar Rao is popularly known) and the TRS regime of indulging in corruption and failing to fulfil their promises.

"I want to assure the people of Hyderabad that we want to free the city from Nizam culture...we will make Hyderabad a global IT hub and a modern city, where none will be appeased and no injustice shown to anyone.

We will begin this new work culture," Shah said.

The BJP, he said will take Telangana from dynasty led parties to democracy, an apparent reference to Owaisi's (All India Majils-e-Ittehadul-Muslimeen (AIMIM) chief and Hyderabad MP Asaduddin Owaisi) party or KCR's party TRS, and also from corruption to transparency.

Shah also demanded to know if KCR had the courage to openly tell the people about his party's "secret" alliance with AIMIM.

He also listed out various developmental works and projects implemented and sanctioned by the Centre, adding “It is the promise of BJP... what we promise, we fulfil”.

According to Shah, TRS and AIMIM were the biggest obstructions in making Hyderabad a global IT hub.

"....the way Hyderabad was flooded in the recent rains... no work was done for clearing storm water drains and desilting them... the manner in which encroachments are increasing and growing due to the blessings of a party...

AIMIM is the partner of TRS and on whose directions illegal constructions happen.

People here are angry and upset with TRS and Owaisi's alliance," he alleged.

On TRS leaders' charges that no central aid was given for relief work in Hyderabad, which was hit by heavy rains and floods in October, Shah said approximately Rs 500 crore was given.

He also alleged that KCR neither visited flooded areas with legislators or MPs nor held a meeting of the GHMC.

Shah flayed KCR for not implementing the PMJAY health insurance scheme in Telangana and added that the state has benefited the most under Union government's PM SVANidhi scheme, which was launched to help poor street vendors impacted by the COVID-19 pandemic.

Shah earlier participated in a roadshow here after offering prayers at the Bhagyalakshmi Devi Temple in the Old City.