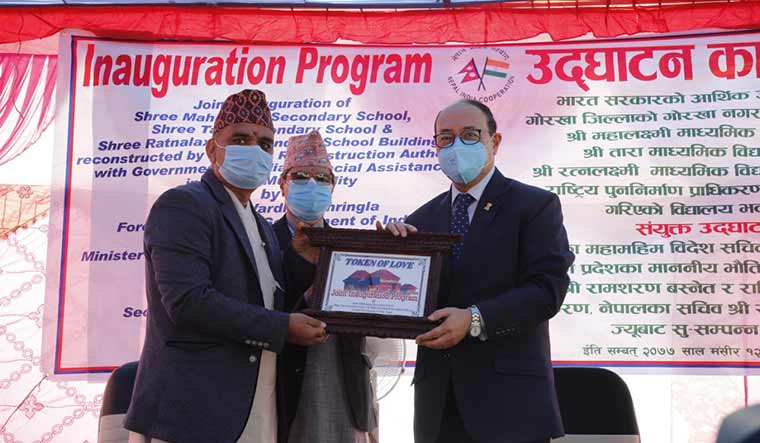 Foreign secretary Harshvardhan Shringla reached out to Nepal as only he can – by speaking in Nepali, the language he speaks at home. The diplomat, who is of Sikkimese stock and hails from Darjeeling, wowed the audience at the Asian Institute of Diplomacy and International Affairs (AIDIA) in Kathmandu on Friday as he addressed them in Nepali.

For all those detractors in Nepal's political set-up, who have been cocking a snook at the familial ties between the two countries, Shringla's mere presence was enough to silence such arguments. When Chinese defence minister Wei Fenghe comes visiting a couple of days later, he will not be speaking with the fluency of a native.

Shringla's Kathmandu visit is one of the most important among the various tours he has undertaken in the last few months. It comes as a salve to a very bruised bilateral relation—one where the scab has yet to form. He spent Thursday in a string of high-level meetings, starting with Prime Minister K.P.S. Oli. He met bureaucrats as well as representatives of Nepali Congress and Madhesi parties. During the meeting with Oli, the two spoke about the need to “focus on the positives of the wide-ranging relationship” and the importance of respecting each other's sensitivities. The white flags are fluttering, there is an attempt at looking beyond the rancour of the past months. Oli even reportedly conveyed his desire to build on the momentum in the bilateral relationship and enhance the level of engagement.

In his interaction with Nepal's foreign secretary, Bharat Raj Paudyal, the most sensitive term—border issue—was finally touched upon, with both sides sharing their perspectives on the matter and discussing ways to take it forward under appropriate bilateral mechanisms. Some years ago, the two sides had decided that border issues would be discussed at the level of foreign secretaries. However, the border issue-specific meetings hadn't happened. Even this meet was not entirely dedicated to the border issue, it was just part of the various discussions, that included the entire gamut of bilateral relations and was also a stock-taking of the various India aided projects and activities underway. Given that Nepal had unilaterally gone ahead and amended its constitution to ratify a new map that includes swathes of disputed territory in the Kalapani region, there is very little space for any border issue negotiations right now. To now resolve such a sticky issue, given that the ink has already dried on the Nepali amendment, will require oodles of diplomacy and even out of the box thinking.

For the present, though, the important issue that the two are at least talking about it.

India and Nepal have only a few points on the border where there is a dispute; Kalapani is one region, the Susta area is another. For ties to get so fractured over one disputed zone, largely unpopulated, is a big blow to the relationship.

A lot of success with Nepal will also depend on how quickly and efficiently India finishes pending projects, including the Pancheshwar multipurpose project. India is also hopeful that Nepal will soon allow free movement across the border, and even start and air travel bubble. While India allows free movement across the border, Nepal shut down entries when the pandemic began. Ironic for two countries which share open borders and visa-free travel.

Shringla made the assurance of keeping Nepal among the top in India's reach out list once the much-awaited COVID-19 vaccine starts getting into manufacture mode. "Given our genetic profiles, what works for India is likely to work for Nepal as well," he said, cleverly underscoring the deep familial links. Shringla handed over 2,000 vials of the antiviral Remdesivir to Nepal, as part of India's continued support in combating the pandemic.

On Friday, he went to Gorkha district and inaugurated three schools that have been established with help from India. Clearly at home in a rural region, Shringla's presence was enough.

The choice of Gorkha itself is important. India has always been involved in the development of this district, from where it recruits soldiers—officers and jawans. Nepali nationals are employed in the Indian Army, not just in the Gorkha regiment but also in other branches. In past months, there have been mutterings among politicians of Kathmandu on how this arrangement also needs a revisit. Of course, any move on Nepal's side to alter the existing arrangement will be to its own disadvantage. As experts point out, the salary a Nepalese jawan draws in the Indian Army is higher than what a junior officer in the Nepal Army would be drawing. Observers say that such utterances point towards the increasing influence of Beijing in Nepal's internal politics.

Shringla's is the third high-level visit from India in the last few weeks, he was preceded by Research and Analysis Wing head Samant Kumar Goyal and army chief MM Naravane. The former was bequeathed the rank of an honorary general of the Nepal Army, a tradition both countries have to honour each other's army chiefs.

The visits will have to increase, and the bilateral strengthened further if India has to counter the Chinese influence. Since Narendra Modi's first term in 2014, there have been 16 meetings at the head of state/government level, with Modi visiting Kathmandu four times, Oli visiting India seven times. However, at the level of ministers and senior bureaucrats, the meetings could have been more frequent. For instance, at the foreign minister-level, the Joint Commission has convened three times.

Nepal has made it clear that it wants to go ahead with both India and China. Foreign minister Pradeep Gyawali made this clear before the Parliamentary Committee. The biggest takeaway from Shringla's tour is that it lays the ground to resume intensive cooperation between the two countries.