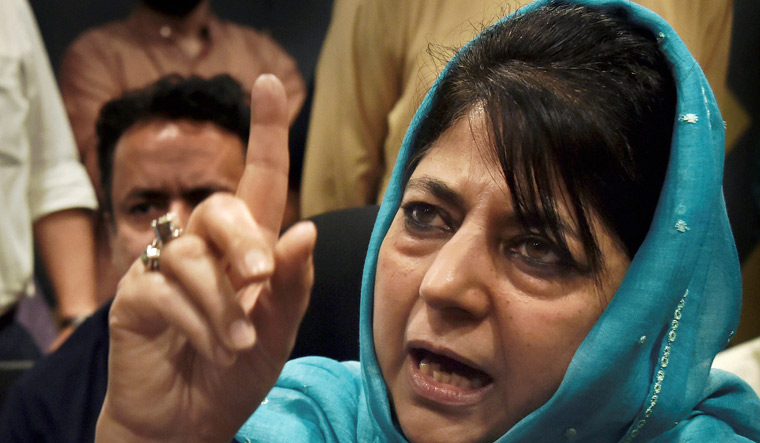 A month after three PDP leaders—T.S. Bajwa, Ved Mahajan and Hussain A. Waffa—resigned from the party claiming that their "patriotic sentiments" were hurt by PDP president and former Jammu and Kashmir chief minister Mehbooba Mufti's remarks, three more leaders quit the party, saying the PDP is becoming the "B team" of the National Conference (NC).

According to news agency ANI, the resignation letter of Dhaman Bhasin, Fallail Singh and Pritam Kotwal read: "We've no option but to quit the party which has been hijacked by unscrupulous, communal elements with mysterious character."

“Putting our political career at the stake, we joined PDP from the very first day of its formation with an aim to provide a secular alternative to corrupt and dynast NC as late Mufti Mohammad Sayeed had vision to frustrate evil designs of communal and parochial elements but the party leadership has, unfortunately, abandoned Mufti Sahib agenda to become B team of NC,” the resignation letter, accessed by the news agency stated.

Further, they said in the letter that apart from becoming the team B of the NC, the PDP leadership has recently given "highly provocative and controversial statements against the basic principles of the founder of the party." "Keeping in view the prevailing situation, being disciples of late Mufti Mohammad Sayeed it is difficult for us to work in the party which has become second fiddle to the NC. We are forced to take this difficult decision with heavy heart to leave the party which we were formed as disciples of late Mufti Mohammad Sayeed,” the MLAs said in their resignation letter.

Earlier, Bajwa, Mahajan and Waffa, in their resignation letter, said they were feeling "quite uncomfortable over some of her (Mufti's) actions and undesirable utterances especially which hurt patriotic sentiments". The PDP chief had said she was not interested in contesting elections or holding the tricolour, the national flag, till the constitutional changes enforced on August 5 last year were rolled back.

These developments comes in the wake of the formation of People’s Alliance for Gupkar Declaration (PAGD), an alliance that comprises National Conference, People Democratic Party, People’s Conference, Awami Ittehad, Awami National Conference, CPI(M) and J&K People’s Movement, to fight for the restoration of Article 370 and statehood to Jammu and Kashmir.