India is a living example of religious harmony 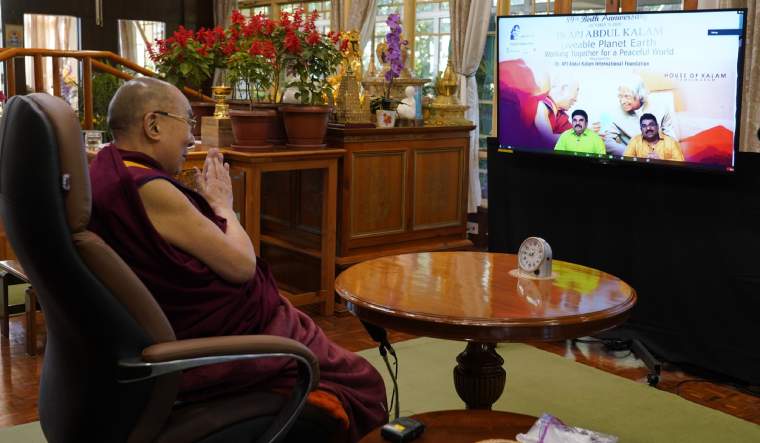 On the occasion of the 89th Birth Anniversary of Dr A.P.J. Abdul Kalam, His Holiness the Dalai Lama along with Dr Kalam's grandnephews Sheik Saleem and Sheik Dawood

A.P.J. ABDUL KALAM International Foundation invited His Holiness the Dalai Lama to give a talk (Liveable Planet Earth–Working Together for a Peaceful World) and answer questions from students around the world to celebrate the 89th Birth Anniversary of Dr A.P.J. Abdul Kalam on October 15, 2020. He was welcomed by the grandnephews of Dr Kalam (A.P.J.M.J. Sheik Dawood and A.P.J.M.J. Sheik Saleem) and co-founders of the foundation. They told the Dalai Lama how honoured they felt that he had joined them by a video link from his residence. They quoted Dr Kalam’s words as evidence of his dream of a more peaceful world: “Where there is righteousness in the heart, there is beauty in the character. When there is beauty in the character, there is harmony in the home. When there is harmony in the home, there is order in the nation. When there is order in the nation, there is peace in the world.”

“Respected friends,” the Dalai Lama replied, “it is also a great honour for me to have the opportunity to remember and talk about Dr Abdul Kalam. When I first came to India, in 1956, Rajendra Prasad was the president. He was succeeded by Dr Radhakrishnan. Over the years I’ve had the opportunity to meet many presidents and prime ministers. Among them, there was something special about Dr Abdul Kalam. He came from an ordinary family, but through education and sheer hard work, he rose to become an eminent scientist. He was a gentle, genuine and dignified leader.

“Today, we have the opportunity to remember him and talk about India’s culture that is thousands of years old, especially the custom of maintaining inter-religious harmony. Dr Abdul Kalam was a Muslim who held the highest position in the country. And since all the world’s religions flourish here and live together in mutual respect, India is a living example that religious harmony is possible.

The Dalai lama concluded the talk by saying that the key thing was to have self-confidence. “And a major factor in this is to remain honest and truthful, then your confidence will be soundly based. Self-confidence combined with negative emotions will just lead to disaster. Human beings tend to be optimistic by nature. If you are truthful, honest and have self-confidence, you’ll be able to use your human intelligence well. What we usually say is that intelligence needs to be combined with warm-heartedness and backed by truth and honesty,” he said.

A.P.J. Abdul Kalam International Foundation Trust is a non-profit organisation based in Rameswaram. AKIF was established in 2015 with the aim of carrying forward Dr Kalam's Vision 2020 dreams to transform India into a developed nation. The foundation supports programmes in education, science and technology, rural development, and health care. Its mission is to work in remote regions. The foundation takes pride in working with all sections of society, students, corporate companies and schools.