Now, Madhya Pradesh to have a ‘cow-cabinet’ for cow progeny conservation 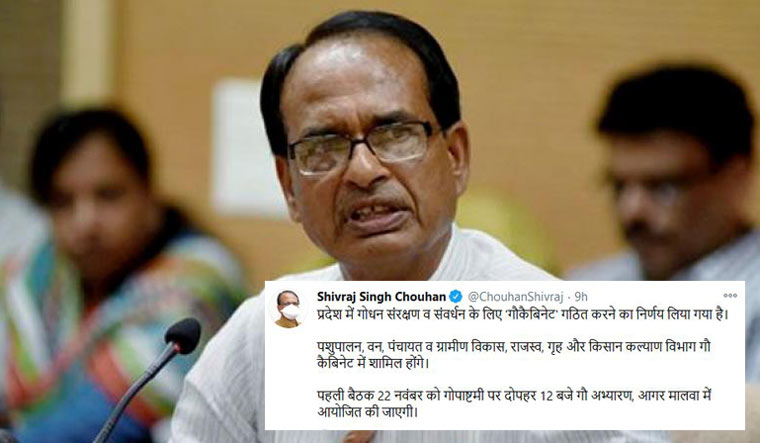 Cosy with a full majority, the Shivraj Singh Chouhan-led BJP government in Madhya Pradesh has started to take populist decisions. On Wednesday, Chouhan announced that a ‘cow-cabinet’ will be constituted in Madhya Pradesh for conservation and protection of cow and its progeny.

Madhya Pradesh is probably the first state in the country to have a cabinet dedicated to cow and its progeny. Chouhan was also the first to set up a dedicated agriculture cabinet in the state in the year 2011.

Chouhan, who is currently on a pilgrimage to Tirupati in Andhra Pradesh, tweeted to inform this decision. In the tweet, the CM said, “Departments of animal husbandry, forest, panchayat and rural development, revenue, home and farmers’ welfare will be part of the cow cabinet. The first meeting of the cabinet will be held on the day of Gopashtami on November 22 at Agar Malwa (district).

A state government note added that the the focus is on integrated agriculture and farming to make the farmers in the state economically strong. In this direction, cow and progeny rearing is an important element. Setting up of the cow cabinet will help in removing the hurdles in cow rearing and also in making it more economically viable.

There will be efforts to promote products like cow dung cakes and wood and other such products by trying to give them a proper market. Also, cow-milk based products will be given wider market, the note said.

Cow protection and conservation has been turned into a important issue in Madhya Pradesh and many other north Indian states lately. Even the previous 15-month-old Congress government led by Kamal Nath had put a focus on the issue, something that was looked upon as peddling of soft Hindutva by the Congress. Under the Mukhya Mantri Gau Seva Yojana (CM’s service to cow scheme) the Congress government had started online donation portals for those interested in cow protection and offered them income tax rebate, apart from starting construction of cow shelters.

However, on Wednesday Kamal Nath attacked Chief Minister Chouhan over the announcement. He said that Chouhan had promised to set up a dedicated cow-department (ministry) before the 2018 Assembly polls, but now has changed stance to announce a cow-cabinet.

“He had also promised to establish a network of cow-sanctuaries and cow shelters across the state and also home-level cow shelters. But forgetting his old promise, he is making a new announcement again. Everyone knows that during the earlier 15 years and the recent eight months, Shivraj government did nothing for conservation and protection of cows and progeny. Rather the government reduced the Rs 20 per cow provision for fodder made by the Congress government,” Nath tweeted.

He added that the Congress had promised to construct 1,000 cow shelters when in government and for fulfilling this promise his government had started large-scale constructions. “At least the Congress work for cow conservation and protection has given some good sense to the BJP government and they have decided to pay attention to gaumata (cow mother). But if they indeed want to work in the direction, it should start cow shelters construction across the state and fulfill all its earlier promises,” Nath said.