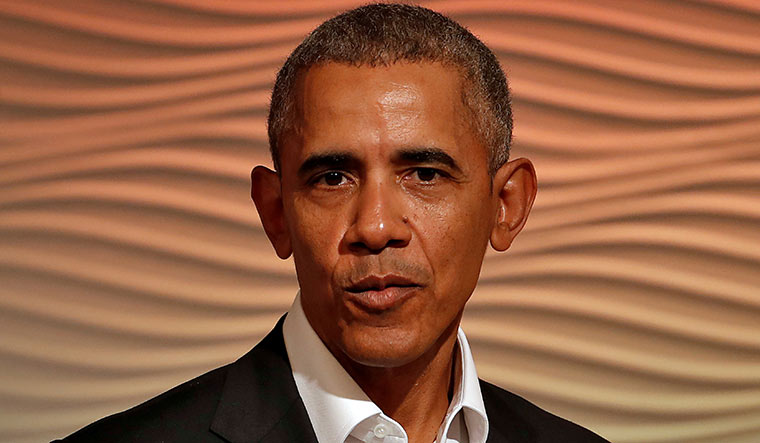 All the president’s thoughts: Former US president Barack Obama’s memoir, A Promised Land, will be out in November, just after the election. It will be one of two volumes that will cover his early political days up to the death of Osama bin Laden in 2011. Due to high demand, Crown, an imprint of Penguin Random House, is expected to print three million copies of the US edition initially. “There’s no feeling like finishing a book, and I am proud of this one,” stated Obama | AFP

Barack Obama’s upcoming memoir A promised land has already got tongues wagging for its honest descriptions of Congress leaders Rahul Gandhi and Manmohan—granting a glimpse at what Obama really felt about the leadership in India and the political direction the country was heading for.

New excerpts from the book suggest that Obama was concerned about the rise of a “divisive nationalism” that could take over after Manmohan Singh's tenure.

Obama was all praise for Singh, who served as the Indian prime minister for all but the last two years of his presidency.

“As a chief architect of India's economic transformation, Prime Minister Manmohan Singh seemed like a fitting emblem of this progress: a member of the tiny, often persecuted Sikh religious minority who'd risen to the highest office in the land, and a self-effacing technocrat who'd won people's trust not by appealing to their passions but by bringing about higher living standards and maintaining a well-earned reputation for not being corrupt,” Obama wrote.

He spoke of his first official visit to India, when he went to Mahatma Gandhi’s erstwhile residence in Mumbai, Mani Bhawan.

“More than anything, though, my fascination with India had to do with Mahatma Gandhi. Along with Lincoln, King, and Mandela, Gandhi had profoundly influenced my thinking. As a young man, I’d studied his writings and found him giving voice to some of my deepest instincts,” he wrote.

However, Obama added that Manmohan Singh faced political costs from not playing on the rising anti-Muslim sentiment after the 26/11 attacks. "He feared that rising anti-Muslim sentiment had strengthened the influence of India's main opposition party, the Hindu nationalist Bharatiya Janata Party (BJP),” Obama wrote, adding that Singh told him, “In uncertain times, Mr. President, the call of religious and ethnic solidarity can be intoxicating. And it's not so hard for politicians to exploit that, in India or anywhere else”.

Obama noted how political observers felt Sonia Gandhi chose Manmohan Singh as leader becaus he had “no national political base” and “posed no threat to her 40-year=old son, Rahul, whom she was grooming to take over the Congress party”.

Excerpts released earlier showed that Obama saw Singh as having an “impassive integrity” and that Rahul Gandhi appeared to have a “nervous, unformed quality about him, as if he were a student who’d done the coursework and was eager to impress the teacher but deep down lacked either the aptitude or the passion to master the subject.”

Obama hints that he saw, in the seeds of Narendra Modi’s rise, the same kind of forces that were rising in the US. He expressed doubt over whether Rahul would be able to succeed Singh and hold off the BJP.

“Would the baton be successfully passed to Rahul, fulfilling the destiny laid out by his mother and preserving the Congress Party's dominance over the divisive nationalism touted by the BJP?" Obama asks.

Answering his own question, he wrote, "Somehow, I was doubtful. It wasn't Singh's fault. He had done his part, following the playbook of liberal democracies across the post-Cold War world: upholding the constitutional order; attending to the quotidian, often technical work of boosting the GDP; and expanding the social safety net. Like me, he had come to believe that this was all any of us could expect from democracy, especially in big, multiethnic, multireligious societies like India and the United States. Not revolutionary leaps or major cultural overhauls; not a fix for every social pathology or lasting answers for those in search of purpose and meaning in their lives. Just the observance of rules that allowed us to sort out or at least tolerate our differences, and government policies that raised living standards and improved education enough to temper humanity's baser impulses.”

Expressing a pessimisstic view, Obama felt such impulses would not be easily contained in any democracy. “For they seemed to lie in wait everywhere, ready to resurface whenever growth rates stalled or demographics changed or a charismatic leader chose to ride the wave of people’s fears and resentments. And as much as I might have wished otherwise, there was no Mahatma Gandhi around to tell me what I might do to hold such impulses back.”

A promised land is set to release on November 17.