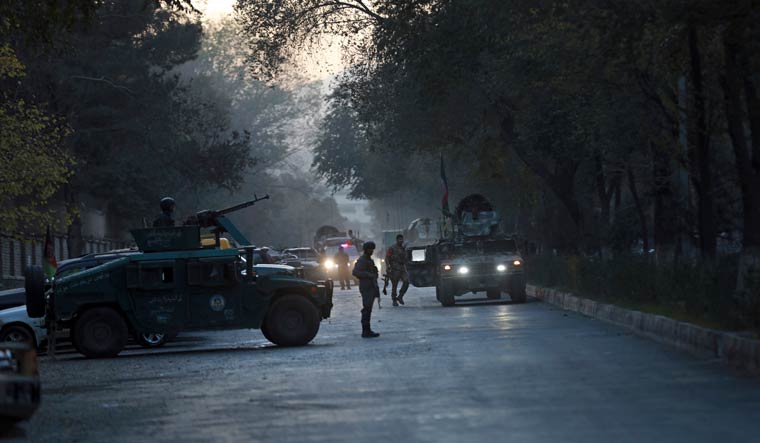 The terror attack at Kabul University on November 2, killing 25 people, has put Indian intelligence agencies on alert about a possible increase in violence and terror activities at the behest of Pakistan's ISI which is attempting to use this period to put pressure on the US to arrive at a quick settlement and install the Taliban in Kabul.

The attack came at a time when the US Presidential polls were round the corner and security sources said it has once again demonstrated the synergy between the various terror outfits being used by Pakistan in the region.

While the Kabul attack has kicked off a blame game between the Afghanistan government and the Taliban with Vice President Amarullah Saleh calling the claims made by the Islamic State-Khorasan Province (ISKP) as fake, pointing towards evidence of a Taliban flag found on the terrorist, Indian agencies said irrespective of who claims the attacks, the choice of the target and the manner of execution is chosen by the Pakistan ISI.

The attack has also brought back memories of the 2014 Peshawar school attack carried out by suspected Taliban gunmen. The perpetrators of the attack are still at large.

Latest intelligence reports paint a grim picture as they point towards the presence of Pakistani carders among the Taliban, ISKP and Haqqani network. These reports have documented evidence through frequent incidents where the dead bodies of slain terrorists have been taken back to Pakistan for burial. There are also Pakistani I-cards found on the bodies of the dead militants, which has also been found in the current case of the attack of the top university, indicating that the attackers were Pakistanis. There is also proof of conversation between one of the students martyred and his brother and the chat clearly states that the attackers are conversing in Urdu, said an official.

''The careful choosing of targets and the timing has helped build a narrative of a deteriorating security situation in Afghanistan that requires immediate reconciliation,'' pointed out a  security official. The US-Taliban peace agreement was an important feather in Pakistan's cap towards the realisation of a pro-Pakistan government in Kabul. And higher the violence now, greater will be the need to arrive at a reconciliation. Therefore it is in the interest of India to remain vigilant since its presence in Afghanistan has been irking the Pakistan ISI,'' said the official.

Sources pointed towards a UN sanctions monitoring team report which indicated that the attacks claimed by the ISKP bear the fingerprints of Haqqani network.