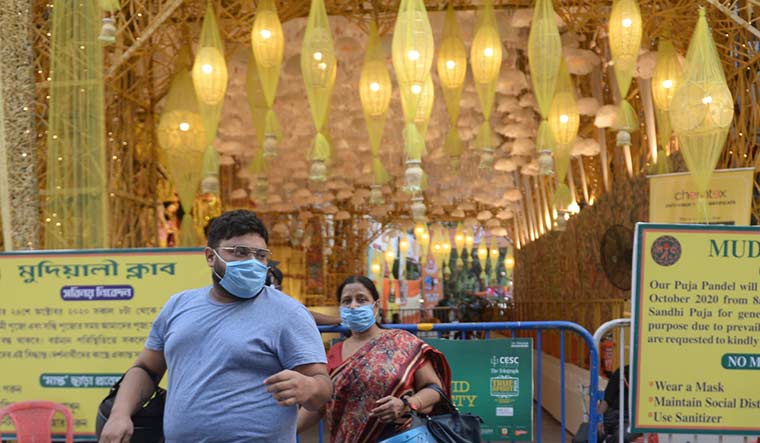 What many had feared about the festival season has started to come true. West Bengal has seen its highest-ever spike in daily COVID-19 cases on the very first day of Durga Puja. Today, around 4,157 people were infected—the highest since the virus first hit the state in April. Until yesterday, that number had been below 4000.

The number of deaths rose to 64. The most number of cases were reported from Kolkata with a spike of 874 cases today. Adjoining North 24 Parganas had only slightly fewer cases a single day spike of 864.

Doctors warn that the number would rise massively given the excessive gatherings in the markets, shopping malls and restaurants.

"We still have time before it could go beyond our capacity. There have to be restrictions immediately," a senior pulmonologist in Kolkata said.

Many doctors wondered why Bengal still conducts only around 45,000 tests daily when neighbouring Bihar tests over one lakh each day.

"I cannot make out anything about it," Kunal Sarkar, a doctor in Kolkata, warned in a video message.

Though the Calcutta High Court has banned entry inside the pandals of Durga Puja, there was no ban on malls and shopping complex. There was little to no enforcement of pandemic restrictions in place, with the state administration yet to act despite complaints from many in civil society against the gathering crowds.

With over 6,000 deaths from COVID-19 in Bengal and the total number of cases at around 3.3 lakh, Bengal’s rise is at odds with the slowdown seen in the rest of India.

While 3,608 patients have been discharged today, this does not mean that they are COVID-free—it includes patients with less severe infections being released from hospitals. However, as more and more crowds gather during the festival season, hospitals still run the risk of getting overwhelmed and becoming unable to cater to patients.