OPINION: Time for Indian women to rise and restore their status as 'Devi'

In our scriptures and Vedic-era Hindu texts, women are venerated and worshipped 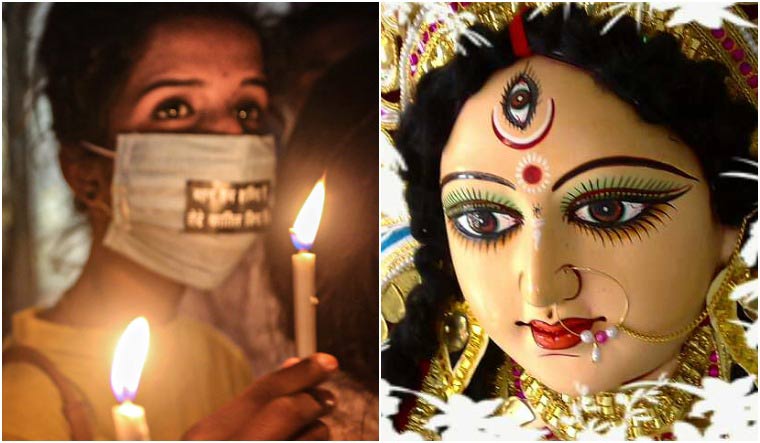 Representational image. A candle-light protest for justice for the Hathras victim | PTI; An idol of goddess Durga | Wikimedia Commons (Subratasar)

‘I am a free woman and proud to be

So damn you and your misogyny

I’ve come this far not turning back

And I stand strong despite your attack’.

These are words to a song I wrote four years ago called Misogyny. It was in response to a gang-rape of a young girl in Mumbai. And I am ashamed to say I don’t recall the specifics of the incident, since this has become so commonplace in our lives. We have become terribly apathetic and our memory and outrage are short lived.

Now with this gruesome rape, torture and subsequent death of a young dalit girl from Hathras, UP, by four upper caste men, our fire has been ignited again. The victim from Hathras is now the 19-year-old dalit Nirbhaya.

Hathras has now become ground zero, teeming with TV crews and reporters looking for exclusives, politicians looking for votes and police authorities for people to arrest. Whatever the reason, it’s important that this horrific tragedy stays in the media glare and people demand justice. However, we should be outraged not just by selective incidents of rape and torture. We should be seething with anger at the depraved state our society has reached with regard to crimes against women.

Caste atrocities, the biggest curse of our society, are partly responsible for crimes against dalit women in many states. However, our mistreatment and violence against women in general, across all sections of society, has reached such abysmal levels that there are literally no words harsh enough to describe this current misogynistic milieu. In Hathras, instead of giving comfort and assurance to the family of the victim, they have been ostracised and threatened for speaking up.

We have to search within to analyse how and why we have regressed to such a level. I don’t think we can place the blame solely on our socio-religious practices, as some would allege. It is heartening to note that in our scriptures and Vedic-era Hindu texts, women are venerated and worshipped and seen as a source of great power.

Hymns such as Devi Suktam in the 10th canto of the Rig Veda, declare feminine energy as the essence of the Universe. It is the Mother eternal who is meditated upon. Devi is proclaiming herself as the source of all creation as is evident in the 3rd Hymn of the Suktam; ‘I lord over the whole universe, I am Supreme erudition, I am the first venerable deity in all sacrificial rites. I offer prosperity, I am present in all beings in various forms. All Gods and Devotees venerate me everywhere’.

Devi here is believed to personify Adi parashakti, the supreme feminine energy. Lakshmi, Saraswati, Parvati are all manifestations of Her.

The Devi Bhagwata Mahapurana suggests that Adi Parashakti is the creator, preserver and destroyer of the whole universe. She is the creator of the Trimurti, The Hindu Male Trinity of Brahma, Vishnu and Shiva.

Here are select verses from other Vedas that extoll the virtues of feminine energy and advocate absolute respect for women.

Oh Motherland! Give us that aura which is present in girls.

Ensure that these women never weep out of sorrow. Keep them free from all disease and give them ornaments and jewels to wear.

Atharva Veda with respect to women in political life;

Women should take part in the legislative chambers and put their views on forefront.

Parents should gift their daughter intellectuality and power of knowledge when she leaves for husband’s home. They should give her a dowry of knowledge.

Among all the world religions, Hinduism can boast of the most prominent presence of the Divine Feminine. Lakshmi – the goddess of wealth, Saraswati – the goddess of Knowledge and the Arts, Kali – the Devi of death and time but also a mother figure symbolic of motherly love and the nourishing and accepting, Ganga Ma, are just a few of the goddesses. Some of the same people who commit these heinous crimes perform Lakshmi pooja, Durga Pooja, worship the Gau Mata (mother cow), and bathe in the Mother Ganges to purify themselves. The hypocrisy of it all!

Even the most vilified figure in Indian mythology – Ravan - had more self-restraint than these barbaric criminals. Yes, he was despicable in the way he tricked and kidnapped Sita – wife of Ram – and kept her imprisoned in the Ashoka Vatika in his palace in Lanka. However, he did not rape and molest her while she was captive. The legend goes that he refrained from having sexual relations with her by force, as he wanted her to willingly come to him, and, of course, Sita never consented to become his queen.

I believe that it’s a combination of two things that has brought us to this current state. Firstly, it’s the class of elected leaders who have taken it upon themselves to be the self-proclaimed gatekeepers of our culture and heritage. Those who believe that women should not be outspoken, should dress modestly, which means no western wear, and know their place in society. And if they don’t, then they invite this fate upon themselves. This is a global trend, not limited to India. It’s an attitude that cuts across religions and nationalities. It’s never the man’s fault. It’s always the liberal woman who has the audacity to speak up in a man’s world. It’s this puritanical attitude of some of our leaders that has made these sex offenders feel emboldened and justified in their actions. Coupled with this is the easy and free access to explicit content and addictive porn to people in rural and urban areas, and an overload of violence across all media. Ironically, it’s the juxtaposition of this conservative mindset with explicit content that has exacerbated sexual crimes against women.

I am against censorship and restricting access to content. However, the time has come to put some controls in place. This alone won’t help. Boys must be educated at a young age to respect women in their family and outside, irrespective of colour caste, religion. This is what is prescribed in the holy books of all faiths. It is the responsibility of our leaders and every male in India to instill respect and to highlight the deification of women in our Vedic culture. All this must happen on a war footing if our country has to prosper and be recognised as a major power and not be branded the rape capital of the world. We must enforce a zero-tolerance policy to violence against women. Indian women need to invoke the goddess Kali to avenge us. It’s time to rise and restore our status as Devis and bring about a new dawn where a woman can chant the lines spoken by a woman in the Rig Veda (10.159): ‘My destiny is as glorious as the rising sun. I am the flag of my home and society. I am also their head….’

Anushka Jagtiani is a former TV journalist, MSc in Comparative Politics from the London School of Economics, music composer and keen student of Vedanta