Farmers’ groups walk out of meeting with Centre, say no minister was present 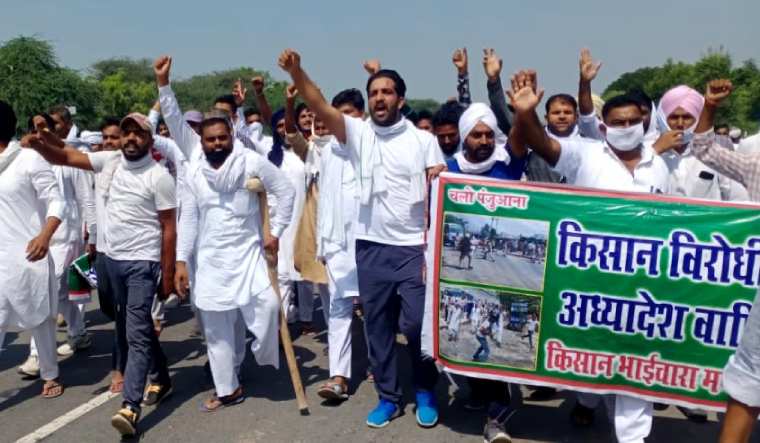 A meeting of 30 farmers’ groups, which have been protesting against the three farm laws, with the Centre failed on Wednesday after farmers' representatives walked out of the venue at Krishi Bhavan in Delhi.

The farmers' representatives told mediapersons, "We walked out as no minister came for meeting. We want these laws to be taken back." Union Minister for Agriculture Narendra Singh Tomar was absent from the meeting. "We weren't satisfied with discussions so we walked out; we want these black laws to be scrapped. [Agriculture] Secretary said he'll communicate our demands further," a farmers' representative was quoted as saying by ANI.

After walking out of the meeting, the farmers tore copies of the three farm laws outside Krishi Bhavan. The various agitating farmers’ groups had constituted a seven-member panel to talk to the Centre.

The farmers groups, which are opposed to the implementation of the farm laws, have been protesting in Punjab for several weeks.

The farmers' organisations, whose agitation against the laws has disrupted rail traffic and severely impacted coal supply to thermal power plants in Punjab, had last week rejected the Centre's invitation to participate in a "conference to address their concerns" on October 8.

Earlier, the state government had appealed to farmers to ease their "rail roko" agitation, saying it needed to urgently transport foodgrain, coal, fertilisers and petroleum on a priority basis besides lifting paddy grain from the mandis.

Farmers had given an ultimatum to Punjab Chief Minister Amarinder Singh to convene a special session of the Punjab Assembly to pass a resolution to reject the farm-related laws .

They had threatened to gherao Congress leaders and government representatives if the demand was not met. Punjab minister Tript Rajinder Singh Bajwa, who met farmers' representatives, said the state cabinet will decide about the special Assembly session on Wednesday.

Farmers in Punjab have been demanding that the three laws passed by Parliament recently be repealed. Besides blocking rail tracks, farmers have laid siege to fuel pumps and shopping malls of some corporates. They staged sit-ins outside the residences of several BJP leaders.