Russia backed off from supplying technology for cryogenic engines to India 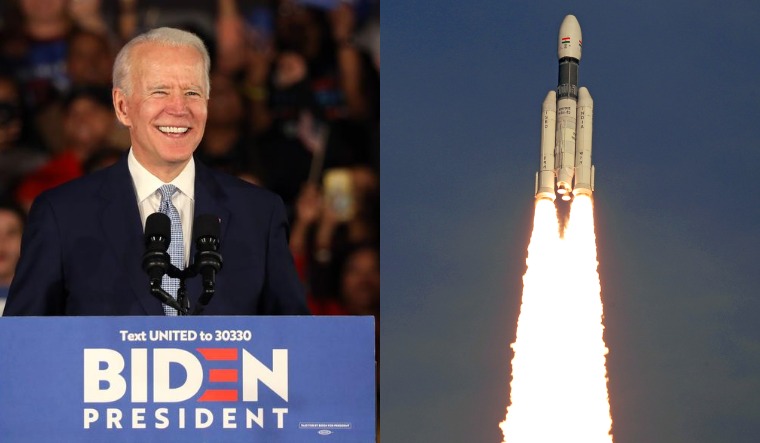 A collage of Joe Biden (Reuters) and a GSLV rocket (ISRO)

With both US President Donald Trump and his Democratic rival, Joe Biden, in the final lap of campaigning for next month's election, the respective campaigns are reaching out to all ethnic groups. Much attention has been focussed on the Indian-American community, with both candidates touting their credentials with 'desis'.

A key element of their outreach to the Indian-American community has been their respective policy positions and past record with India. Joe Biden has already faced some criticism over controversial statements on Jammu and Kashmir and the Citizenship (Amendment) Act.

On Tuesday, BJP MP Subramanian Swamy shared an article from The Frustrated Indian on Joe Biden blocking the sale of Russian cryogenic engine technology to India in 1992.

India signed a contract worth Rs 235 crore with Glavkosmos, the Soviet Union's space agency, in January 1991 to buy seven cryogenic engines, along with technology transfer for these systems, for the Geostationary Satellite Launch Vehicle (GSLV) project.

In a cryogenic engine, both the fuel and oxidiser are in liquid form and stored at very-low temperatures. They are much more efficient and provide more thrust for every kilogram of propellant they burn compared with "solid and earth-storable liquid propellant rocket stages", according to ISRO. This makes them optimal to power rockets carrying heavy payloads, such as satellites weighing in excess of two tonnes.

"However, cryogenic stage is technically a very complex system compared to solid or earth-storable liquid propellant stages due to its use of propellants at extremely low temperatures and the associated thermal and structural problems," ISRO’s webpage on cryogenic engines explains.

The decision to opt for an imported solution was made given the worry that it would take about 15 years to develop an indigenously developed cryogenic engine.

A French offer to sell cryogenic engines was rejected given the exorbitant cost of about Rs 1,000 crore.

The collapse of the Soviet Union in December 1991 and the financial woes that accompanied the 'rebirth' of Russia put Moscow at the mercy of Western powers. The US opposed the sale of cryogenic engine technology on the grounds it violated the 1987 Missile Technology Control Regime (MTCR). However, experts contended cryogenic engines meant for space rockets have little utility for ballistic missiles as the fuelling of such space rockets takes a period of several days. Such a procedure would have little relevance for military use as missiles are intended to be deployable at short notice.

In May 1992, the Senate Foreign Relations Committee added conditions to an aid deal, proposed by then US president George H.W. Bush, that would transfer $24 billion to Russia. The committee voted to block the Russia aid deal if Moscow decided to go ahead with the cryogenic engine contract with India.

An amendment was moved by committee member, Joe Biden, then the senator from Delaware that banned US aid to any former Soviet republic that transferred missile, nuclear or chemical weapons technology abroad.

The Los Angeles Times reported on May 14, 1992, that Biden described the sale of cryogenic technology to India as "dangerous". “I am confident that the Russian leaders will recognise the wisdom of stopping this sale once they see the risk of losing their economic aid... This is no minor sale; this is dangerous,” Biden was quoted as saying by Los Angeles Times.

The US also imposed sanctions on ISRO and Glavkosmos.

In 1993, Russian president Boris Yeltsin, reached a 'compromise' with new US president Bill Clinton on the cryogenic engine deal with India. Russia decided to sell India the seven cryogenic engines, but would not transfer technology for them.