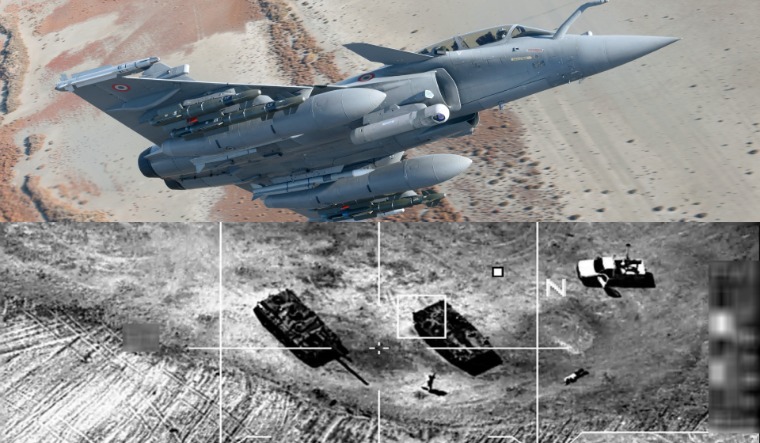 The French defence ministry has revealed that an Indian Air Force pilot was given a demonstration of a new target acquisition system meant for the Rafale fighter.

The French defence ministry informed on its website earlier this week that an Indian Air Force pilot flew on a Rafale F3R fighter on September 22 that was equipped with the TALIOS target acquisition pod.

Targeting acquisition systems are sensors fitted on an pod mounted externally on the aircraft. They typically have laser seekers, infra-red and electro-optical sensors to acquire enemy targets on the surface and guide bombs or missiles onto them.

The TALIOS (which stands for Targeting Long-Range Identification Optronic System) was developed by French company Thales and deliveries to the French Navy and Air Force began in late 2018. It is scheduled to reach 'first operational capability' this month, the French defence ministry said.

The French defence ministry said the purpose of the flight with the Indian pilot was "to demonstrate the capabilities of the TALIOS in the air-to-air, air-to-ground and air-to-sea domains. For this first, the Indian pilot was able to note the added value provided by the TALIOS compared to the Rafale sensors. Regarding the air-to-ground capability, the effectiveness of the pod TALIOS both in its use during deep-strike missions and in the detection and engagement of small mobile targets was apprehended. In the air-sea sector, the TALIOS has proven itself in the tracking of boats."

Thales claims the TALIOS employs artificial intelligence technology for automatic detection of targets and can undertake both target acquisition and reconnaissance missions, in addition to providing colour imagery. Prior to the development of the TALIOS, the absence of a modern target acquisition system was perceived to be a disadvantage for the Rafale previously. Qatar ordered a US-developed target acquisition pod for its Rafale jets.