With eye on China, India taps its Buddhist roots to cement ties with Lanka 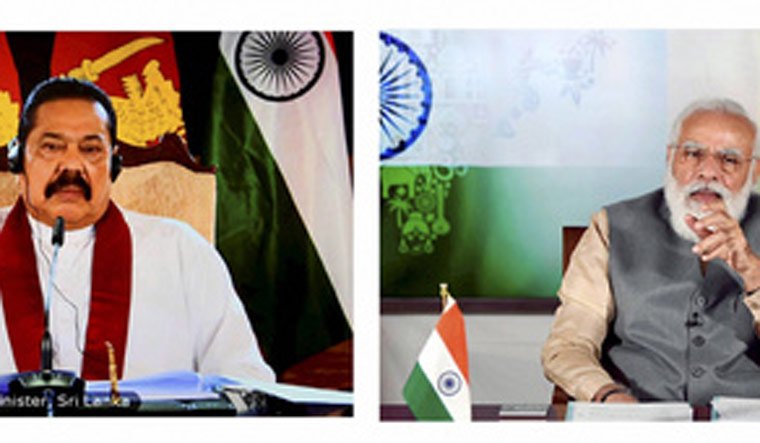 India now appears to be banking on the Buddha to deepen ties with Sri Lanka. Prime Minister Narendra Modi, on Saturday, announced a grant of $15 million to promote Buddhist ties between the two countries.

“The grant will assist in deepening people-to-people linkages between the two countries in the sphere of Buddhism,’’ said Amit Narang, joint secretary, Indian Ocean Region Division, at a virtual briefing on Saturday.

The grant was one of the takeaways from the first ever virtual summit between PM Modi and his Lankan counterpart Mahinda Rajapaksa. This was the first ever virtual bilateral summit for Sri Lanka. The summit, which lasted for approximately an hour, primarily focused on cultural ties. It was also a chance to reach out to Sri Lanka, to signal that the relationship between the two countries is special.

"In the current COVID-imposed restrictions the successful conduct of the virtual summit reflects the high degree of commitment at the leaders level on taking forward the bilateral relationship,'' said Narang.

The grant will be used for construction or renovations of Buddhist monasteries, capacity development, cultural exchanges, archaeological cooperation, reciprocal exposition of Buddha’s relics, strengthening of Buddhist scholarship, and supporting the clergy.

The Modi government has been trying to move away from pushing its Ram agenda abroad—which did not get much traction—and turn to Buddha. In 2017, on his second visit to the island nation, Modi inaugurated the Day of Vesak, which marks the birth, enlightenment and passing of Lord Buddha, in Colombo—in an attempt to reclaim the Buddhist ties with the country. So far, China has been claiming this space and has been particularly keen on wooing the powerful Buddhist clergy. This is the first time that India has chosen to find a toehold in the area.

“It was agreed that the Indian side would facilitate the visit of a delegation of Buddhist pilgrims from Sri Lanka in the first inaugural flight to the Sacred City of Kushinagar,’’ said Narang. “As you know, Kushinagar Airport was designated as an international airport recently, recognizing its importance as a Buddhist site. Both sides also agreed to explore opportunities in the areas of Ayurveda and Yoga.’’

While the MEA described the outcome of the bilateral summit as “substantial’’ and ambitious, there has been little headway made in the thorny issues. The Sri Lankan request to defer paying their debt is still ongoing. “Technical discussions on Sri Lanka’s request for debt deferment are going on,’’ said Narang. “India has already provided a US$400 million currency swap facility to the Central Bank of Sri Lanka in order to assist with economic recovery and to tackle the COVID-19 related disruptions. An additional request for a bilateral currency swap arrangement worth around US$1 billion by the Sri Lankan side remains under discussion.”

For its part, Sri Lanka too, has been unwilling to commit to East Container Terminal project in Colombo. The project had been touted as a big victory as India and Japan were jointly going to construct the terminal at the Colombo Port. However, the project ran into trouble and had been put on hold in July. India believes that this is due to Chinese influence. The project did come up for discussion. However, the MEA was not forthcoming on details. “The ongoing infrastructure and connectivity projects were discussed,’’ said Narang. “Prime Minister Modi expressed his confidence that the government in Sri Lanka will take early and decisive steps for their early implementation in accordance with existing understandings and in mutual interest of both sides.’’

In short, it seems that Rajapaksa is keeping India guessing and has chosen not to take a decision just yet. It goes without saying that India will be keen to start work on the terminal as it will want to negate the Chinese influence. The joint venture with Japan was also to ensure that it is a project of collaboration and doesn’t seem like a direct contest between India and China.

On the cards, however, is also a possible air bubble with Sri Lanka. While India has proposed the idea, it is waiting for Sri Lanka to open up international air travel to make this a possibility.