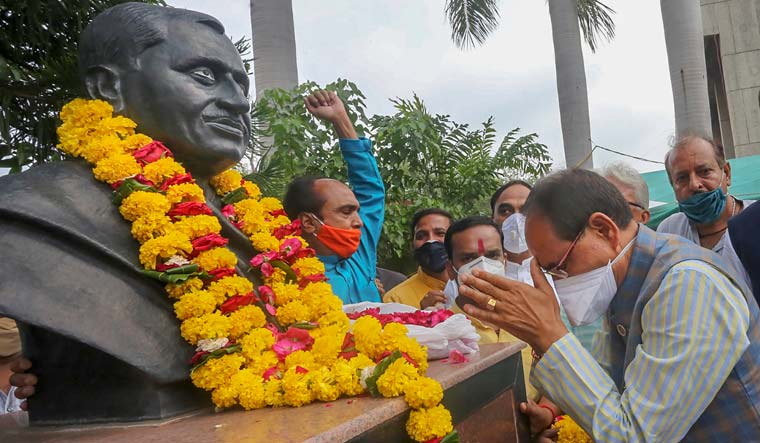 Madhya Pradesh Chief Minister Shivraj Singh Chouhan on Saturday used a pun to take a jibe at the opposition Congress when he called for 'sanitisation' to totally clean off 'hand'. His remarks targetting Congress’s election symbol came a day after the Election Commission announced polls dates for Bihar.

The poll panel is yet to announce by-poll dates for different states including the 28 crucial seats in Madhya Pradesh.

In a tweet in Hindi, Chouhan said: “My dear friends, polls are to be held in Madhya Pradesh, Bihar and many other parts of the country. In view of the corona situation, we have to follow all the guidelines of the election commission. ‘Hand’ should be cleaned totally through ‘sanitization’.”

The Congress retorted on the same platform. The official Twitter handle of the MP Congress said that when destruction is imminent, conscience dies.

“Whether by-polls will be held or not in Madhya Pradesh during the corona times will be decided by the Election Commission in a meeting on September 29. Has the election commission told you (Chouhan) in advance that by-polls in MP are to be held? What kind of alliance is this? People will sanitise the traitors and maintain two yards of distance with BJP,” Saluja tweeted in Hindi.

The chief minister had transferred funds to the accounts of over 5 lakh farmers in an event held in Bhopal on Friday on the occasion of the birth anniversary of Pandit Deendayal Upadhayaya, the Bharatiya Jana Sangh ideologue, and called it the launch of the farmers’ welfare scheme.

Under the scheme, the state government has decided to provide additional Rs 4,000 per year to the beneficiaries of the PM Kisan Samman Nidhi scheme in which there is a provision of payment of Rs 6,000 annually to identified farmers.

On Saturday another formal launch programme for the CM welfare scheme was held in Bhopal. Congress spokesman Saluja said that lakhs of public fund was spent on the repeat event and it was also an insult of Pandit Upadhayaya whose birth anniversary was called as an auspicious occasion for the launch of the scheme by the CM.

The Congress also said that the event was originally planned for Saturday, but hurriedly held on Friday as the MP government thought that the ECI might announce the schedule of by-poll for the state later on Friday and model code of conduct will be imposed.