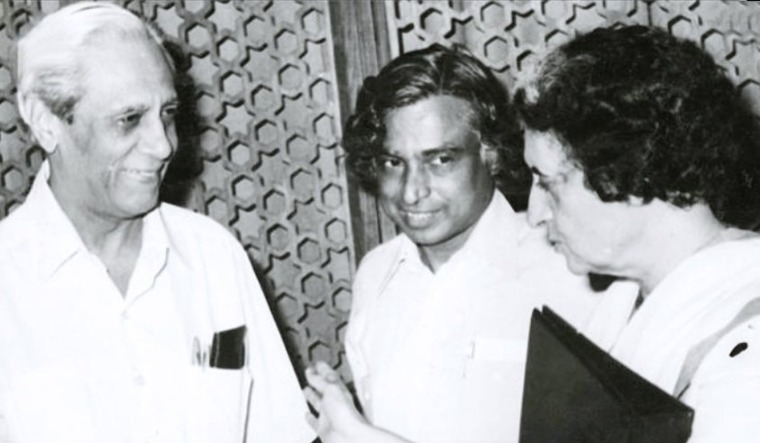 Satish Dhawan (left) with A.P.J. Abdul Kalam and Indira Gandhi in 1980 | Via Twitter

Scientists are stereotyped as people who do not bother much about their looks, are absent-minded and quirky. Occasionally, one comes across a drop-dead-gorgeous-looking scientist. It is also not rare to meet scientists with a yen for the arts and literature. But a scientist who looked like a Hollywood star, raved over H.H. Munro's short stories and held masters’ degrees in subjects as varied as English, engineering and mathematics, could multitask with a clear head and shape a country's scientific vision is a rare personality.

Satish Dhawan was that rarity.

Go to Bengaluru and you are bound to hear the story of why the Indian Space Research Organisation (ISRO) and the Department of Space is headquartered there. After the unexpected demise of Vikram Sarabhai in 1971, when India's fledgling space programme was headless (M.G.K. Menon took charge for a few months), then prime minister Indira Gandhi approached Dhawan to take over. Dhawan was at that time head of the Indian Institute of Science, so he agreed to the additional responsibility on condition that the space organisation be headquartered in Bengaluru.

Later, ISRO chairperson and Dhawan's protege K. Kasturirangan had once written that there were other, less personal reasons, too. He knew the advantages of the city, with its good climate and access to other institutions of science and technology, like the IISc and National Aeronautical (now Aeroscience) Laboratories. In fact, Dhawan would have liked all of India's space activities to be centred around Bengaluru. However, since Thiruvananthapuram already had a head-start, it continued to be the launch vehicle-making centre, while the Space Application Centre stayed in Ahmedabad.

Dhawan gave India's space programme the shape it still retains. He brought in atmanirbharta into ISRO decades before it became a political catchphrase. “After the sanctions post Pokhran-1, he was keen that India's space programme should not be reliant on imported components, thus he insisted that manufacturing be done in-house,” recalls a senior journalist.

Smart and savvy in outlook, he also gave India's space mission its vision of harnessing space technology for national development. The bit on planetary exploration was added much later, when Chandrayaan-1 became a reality. The space vision reflected Dhawan's belief that technology should be used to better lives—he brought in the concept of distance education through satellites long before the lockdown made virtual schooling a buzzword. There was another reason why he kept ISRO clear of any militarisation—it could hamper international tie-ups. Thus, when India decided to develop missiles, the task was given to the Defence Research and Development Organisation (DRDO), and Dhawan sent his ‘boy’, A.P.J. Abdul Kalam, to the organisation, to become India's missile man. Last year, when India tested its anti-satellite weapon, ISRO chairman K. Sivan could calmly say it was not involved in the mission, apart from providing a defunct satellite.

Even though the Soviet partnership in those times was strong, Dhawan ensured ISRO had tie-ups elsewhere too; thus, he reached out to France. India and France inked their first cooperation agreement way back in 1977, though there were some collaborations even before.

IISc remained his first love, and he often said that. He drew his salary from IISc, accepting only a token salary of one rupee from ISRO during the time he headed both organisations.

His daughter Jyotsna, in an interview to the IISc magazine Connect, spoke about her father's multitasking ability. Even in the hectic years when he was heading two big institutions, he remained a hands-on parent, often organising painting sessions for the family, where each child and even his wife had to sit down and create a work of art.

Jyotsna says only in retrospect did she realise how crazy things must have been for him, but he never showed it. The anecdote Kalam used to recall about his leadership is legendary, but still requires a re-mention. When the Space Launch Vehicle, instead of heading out of the earth's atmosphere, headed for a dive into the Bay of Bengal, Dhawan took over the responsibility of making the statement of the failure himself. In the next, successful attempt, he told Kalam to address the press. Kasturirangan remembers his mastery over the language, and the way he crafted the resolution setting up the Space Commission and the Department of Space, which reads “Government of India consider it necessary to set up an organisation, free from all non-essential restrictions or needlessly inelastic rules…''

Dhawan and T.N. Seshan started off on a rough note. When the bureaucrat came down from Delhi, the two didn't hit off immediately, and Dhawan is reported to have told him there were two flights back to the capital, which would he take. Seshan served as chief financial officer of ISRO, and the two developed a rapport. Dhawan, however, ensured that apart from the post of the finance representative, the space department remained free of bureaucrats.

He had little patience with people who didn't do their homework, and his brusque dismissals could be toe-curling. He'd tell NRIs who complained about India to do something to change the situation, instead. For him, science, space and technology were tools to be harnessed for improving the lot of Indians. Whether it was the farmer, or the student, Dhawan wanted that their lives be bettered. This was why he made space applications the mainstay of India's space programme.