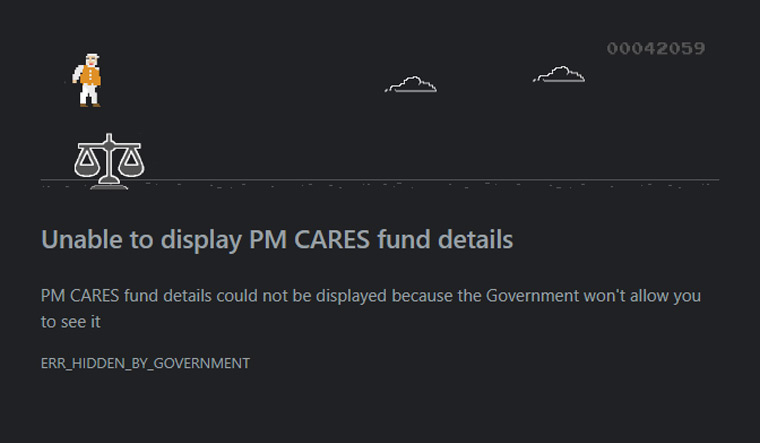 A screenshot from the browser-based game

In a satirical take on the Google Chrome Dinosaur game, a Redditor has made a browser-based game poking at the opacity around the PM-CARES fund.

“I bought the domain name pmcares.fund because it was available and made a satirical Modi-themed chrome dinosaur game in it,” the user posted on Sunday.

The game is similar to the popular T-Rex game that the Google Chrome browser lets users play when they are detected as being offline.

It features a pixelated depiction of Prime Minister Narendra Modi who the player controls, making him jump over a series of obstacles including representations of the judiciary, the media and the coronavirus.

Instead of a game over screen, when the player bumps into obstacles a “GAME NOT OVER” message appears, with a unique message for each obstacle; on hitting the coronavirus-themed obstacle, the game points out that though COVID-19 cases are going up, there is “no problem. Please continue.”

Members of the opposition had taken up the issue of the opacity surrounding the PM-CARES fund in parliament on Saturday, with RSP MP N.K. Premachandran alleging that the fund lacks transparency, noting that is not audited by the Comptroller and Auditor General nor are RTIs applicable to it.

Incidentally, on Sunday, Premachandran tested positive for COVID-19 and was admitted to AIIMS in New Delhi.

Trinamool Congress leader Mahua Moitra also took up the issue of the fund, stating that 70 per cent of the fund’s corpus came from 38 donations from PSUs. “These are PSUs – (donating) out of public money. Without an audit, the conflict of interest is writ large for anyone to see,” she said.

According to the PM-CARES website, the fund was set up "Keeping in mind the need for having a dedicated national fund with the primary objective of dealing with any kind of emergency or distress situation, like posed by the COVID-19 pandemic, and to provide relief to the affected". PM-CARES is a "public charitable trust under the name of ‘Prime Minister’s Citizen Assistance and Relief in Emergency Situations Fund (PM CARES Fund)’, with PM Modi as the ex-officio chairman of the trustee and the Minister of Defence, Minister of Home Affairs and Minister of Finance, Government of India as ex-officio Trustees.

In 2013, a similar satirical website, narendramodiplans.com had been made which promised to showcase Modi’s plans were he to take office. On visiting the site, it would display a button asking the user to click it to know his plans—but upon moving the cursor towards it, the button would move and prevent the player from clicking on it. The site was later taken down, with the owner briefly displaying a message saying that he no longer felt the freedom to make “decent satire on any politician more particularly if it’s constructive”.