From legislations to political dogfights, what can be expected at Parliament monsoon session today

23 new bills will be taken, opposition will push for answers on COVID, LAC, economy 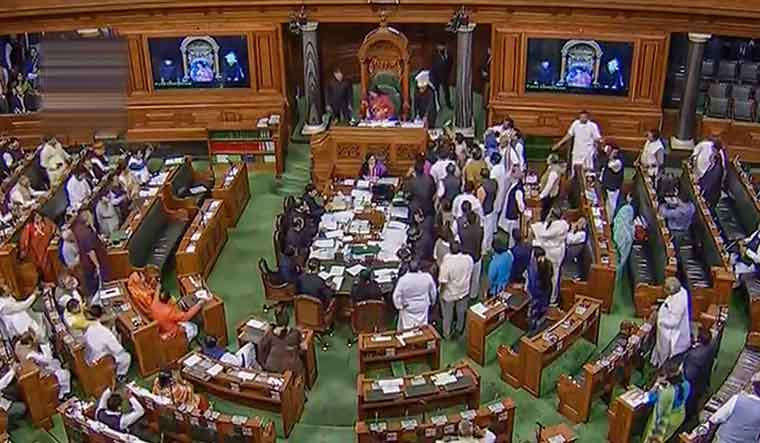 The monsoon session of the Parliament, commencing today, is sure to be a stormy one. The 18-day session will be held under a heavy cloud of coronavirus concerns and ongoing spike in cases. From N-95 masks to gloves, sanitisers and one-dimensional movement procedures, all necessary precautions will be taken as the session commences.

The opposition has already said it would push for answers on contentious issues like economy, standoff with China at the LAC, and the coronavirus. Leader of Opposition in Rajya Sabha Ghulam Nabi Azad said: "India and China are in a conflict situation in Ladakh and there is tension, GDP is tumbling and inflation is rising. We want to discuss many issues in Parliament that the country and its citizens would want to hear about."

The government has listed 23 new bills for introduction in the session.

Some of the more significant ones:

1. Prohibition of Employment as Manual Scavengers and their Rehabilitation (Amendment) Bill, 2020: Proposes to completely mechanise sewer cleaning and provide better protection at work and compensation in case of accidents. Currently, engaging any person for hazardous cleaning of sewers and septic tanks by any person or agency is punishable with imprisonment of up to five years or a fine up of to Rs 5 lakh or both. The bill proposes to make the law banning manual scavenging more stringent by increasing the imprisonment term and the fine amount. The plan aims to modernise existing sewage system and coverage of non-sewered areas; setting up of faecal sludge and septage management system for mechanised cleaning of septic tanks, transportation and treatment of faecal sludge; equipping the municipalities, and setting up of Sanitation Response Units with help lines, according to a document by the Ministry of Social Justice and Empowerment.

2. The Representation of People (Amendment) Bill, 2020: This will amend an electoral law to give legal backing to the recently-formed Delimitation Commission to redraw the constituencies of four northeastern states. In March, the Law Ministry had notified the creation of a Delimitation Commission to redraw the Lok Sabha and Assembly constituencies of Assam, Manipur, Nagaland and Arunachal Pradesh and the Union Territory of Jammu and Kashmir.

3. Preventive measures against violence on heathcare personnel: The ordinance makes acts of violence and harassment against healthcare personnel deployed in combating COVID-19 a non-bailable offence with maximum punishment of seven years imprisonment and Rs 5 lakh fine. It also protects the healthcare fraternity, including doctors, nurses and ASHA workers.

4. Reduction of MP salaries: This bill will assist in the reduction in the salary of MPs by 30 per cent for a period of one year beginning April 1, 2020. The amount will be utilised in the fight against coronavirus.

5. The Farmers' Produce Trade and Commerce (Promotion and Facilitation) Bill, 2020: Seeks to replace an ordinance issued recently to provide for the creation of an ecosystem where the farmers and traders enjoy the freedom of choice relating to sale and purchase of farmers' produce which facilitates remunerative prices through competitive alternative trading channels. The ordinance also promotes an efficient, transparent and barrier-free inter-state and intra-state trade and commerce of farmers' produce outside the physical premises of markets or deemed markets.

6. Jammu and Kashmir Official Language Bill, 2020: As per the bill, Kashmiri, Dogri and Hindi, apart from the existing Urdu and English, will be the official languages in the Union territory. It provides for the languages to be used for the official purposes in the UT.

7. Multi-State Cooperative Societies (Amendment) Bill, 2020: The proposed bill seeks to rationalise government role and increase the members' participation in the working of the multi-state cooperative societies, to increase public faith in these societies and create a conducive environment for their growth and development.

8. Factoring Regulation (Amendment) Bill, 2020: Seeks to permit non-banking financial companies (NBFCs) other than NBFC Factors (whose principal business is factoring) to undertake factoring business as well. It also seeks to permit Trade Receivables Discounting System (TReDS) entities to act as agents for financiers for filing of registration of charge with the central registry as this will lead to operational efficiency.

Opposition parties, including the Congress, Trinamool Congress and the DMK, are planning a joint offensive against the government on issues of national security like the border situation with China, handling of the COVID-19 pandemic, economy and GST compensation to states. The Congress and other opposition parties raised these demands in the first business advisory committee (BAC) meeting for Lok Sabha chaired by Speaker Om Birla today, but the time for these discussions is yet to be allocated. The BAC for Lok Sabha will be held again on September 15 afternoon to further discuss the issues to chalk out the business schedule for the first week. The same demands were raised by the Congress in the BAC for Rajya Sabha too.

The ruling BJP-led NDA is confident of blunting the opposition's expected attacks. The BJP will also be armed with its own set of charges against the opposition, especially the Congress; the top party brass, including its president J.P. Nadda, has pursued the issue of alleged donations to foundations linked to the Gandhi family from the Chinese government. While opposition parties are likely to highlight the continuing surge in COVID-19 cases in India to aim at the government, the ruling party leaders believe that the country's low fatality rate coupled with its relatively fewer cases per million population compared to other seriously-hit countries are points in their favour.