Nair noted China had attained continuous coverage of the globe 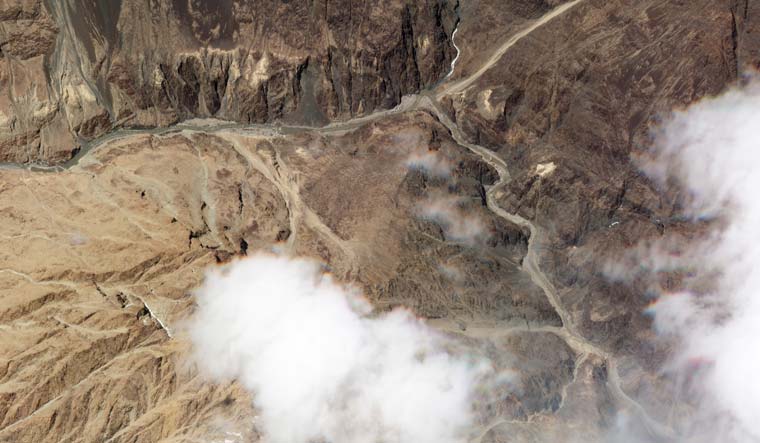 (File) Satellite photo, released by Planet Labs, shows the reported site of a fatal clash between Indian and Chinese troops in the Galwan river valley | Planet Labs via AP

Amid tension on the border with China, veteran space scientist G. Madhavan Nair on Friday said India should ramp up its space assets and enhance coverage of the region to keep pace with the changing times.

In an interview to PTI, he said in almost all areas of security-related activities, space—earth observation, communication and electronic intelligence, among other things—plays a very major role.

"The Chinese side, as far as I understand, have multiplied the number of radar imaging satellites, earth observation satellites and communication satellites several fold, so that they can have continuous coverage of the globe. So, they will get all kinds of information from their constellation (of satellites)," Nair said.

"Leave alone the global coverage, at least across the border, India should have a plan to have continuous coverage," the former chairman of Indian Space Research Organisation (ISRO) said.

He noted that India has demonstrated its capability by launching satellites in various fields.

"Now, there has to be a deployment plan for providing continuous coverage. That is very much needed by the country. Certainly there is a need for multiplying the number of satellites, earth stations and so on. So this needs to be attended to," the acclaimed scientist said.

Speaking in general terms, Nair, who had also served as secretary in the Department of Space and chairman of Space Commission, said space would play a significant role in future wars.

"Whether it's earth observation, electronic intelligence, communications, and also coordinating with various resources like ships, aircraft, drones and all those things, space will play a very major role", he observed.

Protecting space assets is going to be a big challenge in future.

Space technology-wise, India is on par with China, except in the area of human space-flight, he said but noted—referring to the 'Gaganyaan' venture—that work on undertaking such manned missions is already on in the country.

"But Chinese pump in lot of resources (in the area of space). Their budget is nearly five times more than India's annual space budget," Nair said.

"They (China) take an integrated view of civilian and defence requirements," added Nair, during whose tenure of six years (2003-2OO9) as chairman, ISRO/Secretary, DOS, 25 successful missions were accomplished.