Prakash says, “I would not have been here if not for the accident” 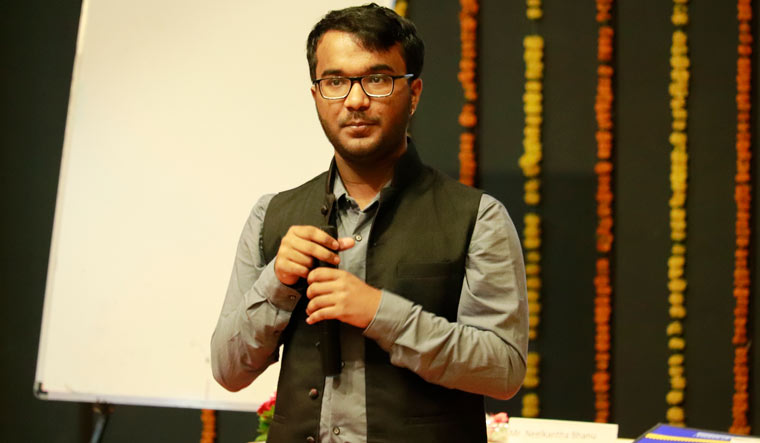 When he was just five years old, the family members of Bhanu Prakash ensured that he did not face a mirror in any corner of the house. This was done to make sure that the child’s disfigured face did not leave him demoralised. To engage the child stuck at home for an entire year, they did one more thing. They introduced him to the world of puzzles. Fifteen years later, Bhanu Prakash won the gold medal and earned the moniker'world’s fastest human computer'.

Looking back, Prakash says, “I would not have been here if not for the accident.”

In his own words, he went through a traumatic phase in his early years as the bike he was traveling in collided with a bus. He was admitted to the ICU with protruding skull, indicating major head injury. Seventy stitches later, he was home. As the doctors stressed on mental engagement as part of recovery process, a new journey began for the Hyderabad resident.

From puzzles, he moved on to abacus where he learnt speed, before taking up arithmetic as a skill for competitions. The maths graduate from St Stephen's College in Delhi has multiple world records for fast arithmetic calculations.

“I have been giving interviews non-stop for the last 17 hours,” was his reply when he was asked about the importance of mental stamina. “This has been only possible because of continuous computation exercises. It seeps into your personal life too. It gives me peace and keeps me away from all the noise.”

According to him, he now trains only for an hour everyday, cutting own from four-five hours in the early years. “It is like a sport. We have to train in cognitive abilities, observation, listening and others and take up smaller and bigger tasks.”

It has not always been an overdose of competitive math for Bhanu Prakash, as four years back, he took a break, introspected and came up with his future pans.

A follower of mathematician late Srinivasa Ramanujam, Prakash has grand vision to use his skill and abilities to reach millions of children in the country.

“I want to eradicate math phobia in the country,” he said. Prakash runs a startup, Exploring Infinities, with a team of 30 in Hyderabad. The startup aims to make children fall in love with math through experiential methods and visualisation activities.

When asked about the reasons why many children dread math at a young age, he replied, “Arithmetic is the first thing to be taught in school and since there are lot of calculations, students tend to hate it.” To an extent, he also blamed the current curriculum for the dislike towards the subject.

Bhanu Prakash wants his venture to be policy driven and also focus on enterprise building. “We are bootstrapped now but we are looking to raise capital.”

Bhanu Prakash, who insists that he not a geeky youngster, says he loves travelling and catching up with friends like any other person of his age.