For the third day in a row, state reported over 1,000 cases 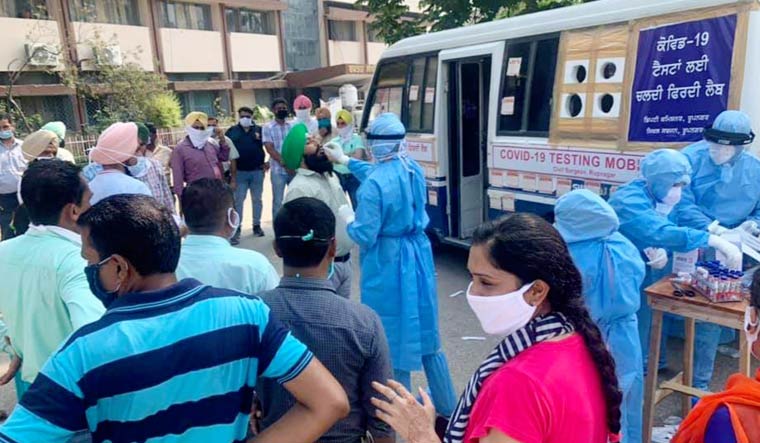 While yet another 1,000 patients were added to Punjab's COVID-19 tally, the institutional management of patients in the state has come under the scanner. In what has caught national attention, patients of a meritorious school isolation centre in Bathinda threatened suicide owing to alleged unavailability of food.

Accusing the authorities of not providing enough food on time, the patients climbed the terrace and even the pavement, raising anti-government slogans and demanding food. They said rather than dying of hunger, they would jump off the roof.

A video clip of the incident has gone viral putting the health department in a fix. The patients alleged that they were already struggling with poor hygiene and sanitation and now they are not getting enough food or getting it very late.

“This has become an everyday affair where either the food is not enough or we end up getting our lunch as late as 5 pm and dinners around midnight. We are patients and we have no access to home or outside food and are struggling with hunger half the day. We cannot take this anymore and nobody is ready to listen to us,” alleged one of the patients.

The district health department admitted the lapses in food distribution, but put blames on the local administration which has been entrusted with providing food. According to SDM Amarinder Singh Tiwana, it was just a one time delay where 60 new patients were brought in and it took time to prepare and distribute the food. Bathinda on Saturday reported 72 fresh cases.

Meanwhile, Punjab reported 23 new deaths in the last 24 hours. The state has declared Ludhiana as the most worrisome area where among the 168 positive cases are local MLA Sanjay Talwar, his wife, two sons and brother. Close to 4,900 cases and 164 deaths have been reported from Ludhiana till date.