COVID-19: Govt to focus on 13 districts with high mortality rate 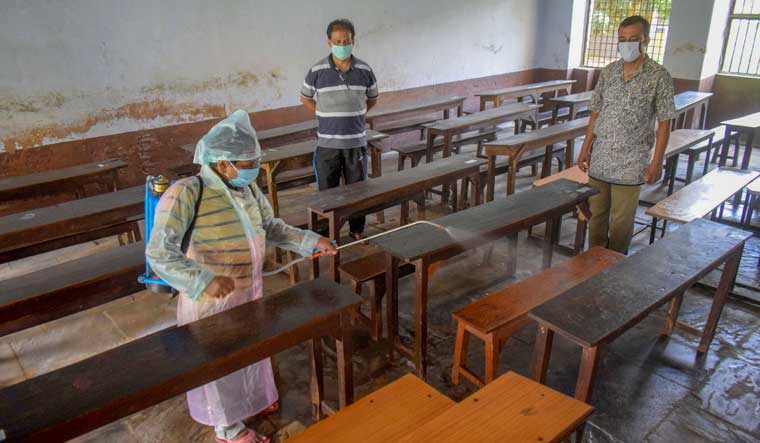 A worker disinfectants a classroom of a school in Prayagraj | PTI

The Union health ministry is focusing on a few districts in the country with a high caseload and death rates.

Top officials from the ministry, including Health Secretary Rajesh Bhushan, and those from the states with high caseload, have been discussing the situation in thirteen such districts—out of 733 districts—that account for nine per cent of active cases and 14 per cent of deaths.

These 13 districts are Kamrup Metro in Assam; Patna in Bihar; Ranchi in Jharkhand; Alappuzha and Thiruvananthapuram in Kerala; Ganjam in Odisha; Lucknow in Uttar Pradesh; 24 Paraganas North, Hooghly, Howrah, Kolkata and Maldah in West Bengal and parts of Delhi. Of these, a surge has been observed in the daily new cases in four districts — Kamrup Metro, Lucknow and the two in Kerala.

The Centre’s move to zero in on specific districts and areas with high cases periodically is in line with what experts in epidemiology have been suggesting as an effective containment strategy. In these districts, ministry officials said, issues of low lab utilisation — less than 100 tests per day for RT-PCR — low tests per million population, decrease in absolute tests from last week, delay in test results and high confirmation percentage among the health care workers persisted.

“States were advised to ensure timely referral and hospitalization in view of reports from some districts of patients dying within 48 hours of admission. States were directed to ensure availability of ambulances with zero tolerance for refusal,” the health ministry officials said. The need to ensure monitoring of asymptomatic cases under home isolation with special focus on physical visits and phone consultation on a daily basis was also highlighted. There was also a need to prepare the district health infrastructure such as ICU beds and oxygen supply.

For technical support, doctors from AIIMS, New Delhi were holding virtual sessions twice a week on effective clinical management of COVID-19 patients in the ICUs. This could help in bringing down the high death rates in these areas. Officials also discussed on how to prevent deaths by ensuring strict surveillance among high-risk persons such as those with co-morbidities, pregnant women, elderly and children.

The state authorities were advised to ensure that State Centers of Excellence and other hospitals participate in these VCs regularly to improve clinical practices. The states were advised to follow all ministry protocols for effective management of containment and buffer zones along with seamless patient and clinical management of patients with special focus on critical cases. Another major area highlighted was that of preventable deaths by strict surveillance among high-risk population like people with co-morbidities, pregnant women, the elderly and children.

The virtual meeting was attended by the principal secretary (health) and director, national health mission as well as district surveillance officers, district collectors, commissioners of the municipal corporation, CMOs and medical superintendents in district medical colleges.