People of Ayodhya did not ask for a hospital, they had asked for a temple, he said 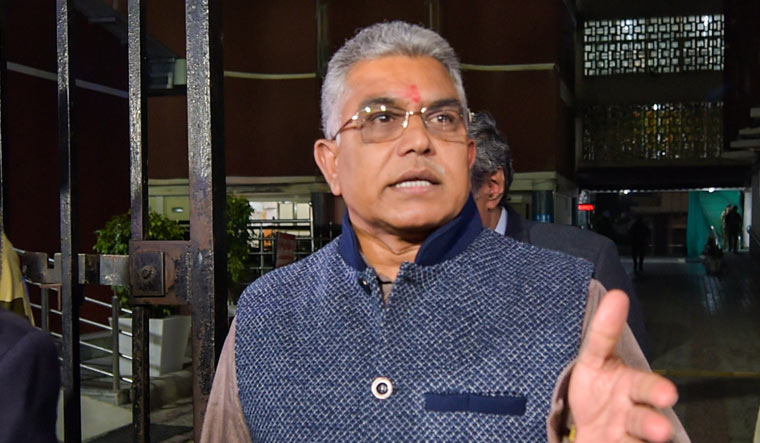 West Bengal BJP president Dilip Ghosh Friday hit out at those opposing the bhoomi pujan for the Ram Temple at Ayodhya and espoused the building of a hospital instead lack the realisation that "mandir culture is needed more than the hospital culture".

Those who are speaking in favour of a hospital at Ayodhya have themselves failed to provide proper healthcare to the people, he said.

Ghosh, however, did not name any person or party.

Keeping up his attack, Ghosh said those who are afraid of speaking about their religion are speaking against the Ram temple construction. But those who are proud of their faith and worship Lord Ram are supporting it.

"Persons opposing the Ram temple (at Ayodhya) are speaking of building a hospital instead are bereft of the realisation that mandir culture is needed more than the hospital culture", he said.

Ghosh, who was speaking to newsmen in Kolkata, said "The people of Ayodhya did not ask for a hospital, they had asked for a temple" and added that a large number of people had sacrificed their lives in the last five centuries to build the Ram temple there.

"Those who are saying that there is need for hospital rather than the Mandir are trying to mislead the people... Those raising the hue and cry over the bhoomi pujan have themselves failed to provide proper health services and build sufficient number of hospitals," he said.

He claimed that people of Ayodhya already have access to excellent health care services. "In Uttar Pradesh you have enough hospitals. The number of (COVID-19) patients is less as the government of that state has controlled the situation.

"I think there should be Mandir culture instead of hospital culture, as Mandir is part of our culture and tradition. Moreover the Ram Mandir at Ayodhya is completely different as it is the pride and honour of our country, " the BJP leader said.

West Bengal Chief Minister Mamata Banerjee, who is one the harshest critics of the BJP, had called for preserving brotherhood between communities and the age-old legacy of unity in diversity on Wednesday, the day when Prime Minister Narendra Modi performed the bhoomi pujan.

Asked to comment on a certain section of people comparing the movement for the Ram Mandir at Ayodhya with the Independence movement, Ghosh said the fight for Ram Mandir is much older.

"For the last 500 years lakhs of people have fought for the Ram Mandir, and thousands have sacrificed their lives for it. The Independence movement had been fought for about 100 years. Those who have no idea about the history of Ram Mandir or the history of the country's independence should get some clarity in their ideas," he said.