Authorities are at the spot, providing all assistance, says Modi 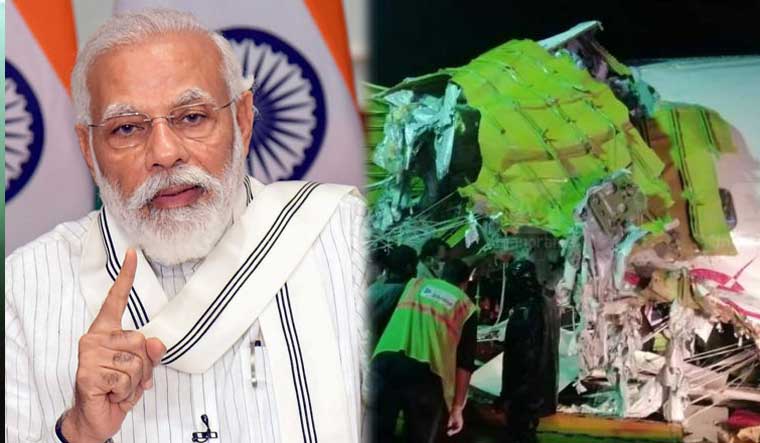 Prime Minister Narendra Modi expressed anguish at the Air India Express aircraft accident in Kozhikode on Friday and said authorities are at the spot, providing all assistance to the affected.

He also spoke with Kerala Chief Minister Pinarayi Vijayan in this regard.

"Pained by the plane accident in Kozhikode. My thoughts are with those who lost their loved ones. May the injured recover at the earliest," the prime minister tweeted.

Authorities are at the spot, providing all assistance to the affected, Modi said.

President Ram Nath Kovind said he was deeply distressed to hear about the tragic plane accident.

"Deeply distressed to hear about the tragic plane crash of Air India Express flight at Kozhikode, Kerala. Spoke to @KeralaGovernor Shri Arif Mohammed Khan and inquired about the situation. Thoughts and prayers with affected passengers, crew members and their families," the president tweeted.

"Deeply distressed to hear about the Air India Express tragedy at Kozhikode. Prayers are with the bereaved families and those injured. We are ascertaining further details," Jaishankar said in a tweet.

Senior Congress leader Shashi Tharoor said it was a "tragic day" for Kerala.

"Tragic day for Kerala. First the deaths in Munnar & now this: I hear both pilots have died. Hope rescue efforts will succeed in saving all the passengers," the MP from Thiruvananthapuram tweeted soon after the news of the accident broke.

Congress leader Rahul Gandhi expressed shock at the incident. "Shocked at the devastating news of the plane mishap in Kozhikode. Deepest condolences to the friends and family of those who died in this accident. Prayers for the speedy recovery of the injured," he said on Twitter.

"My thoughts are with the crew, the passengers and their families and friends at this time," he said.

Congress general secretary K C Venugopal said, "The unprecedented tragedy at Calicut has shocked our collective conscience. Pray to the almighty for the well being of passengers and extend my heartfelt condolences to the families of the deceased. Urge the Congress friends to extend all efforts in rescue efforts."

Congress chief spokesperson Randeep Surjewala said, "Shocked at the news of Air India plane crash in Kozhikode. My prayers with passengers onboard the flight. Hope missing passengers are found soon. Wishing a speedy recovery to those injured."

"Deepest condolences to those who lost their loved ones. May the souls of the departed RIP," he tweeted.