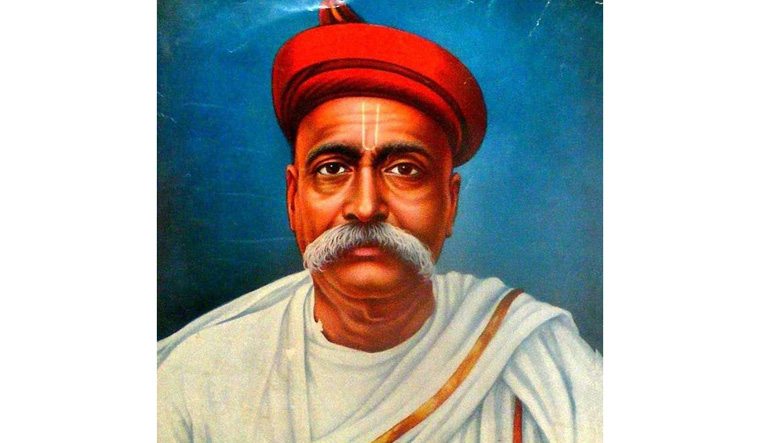 Lokmanya Tilak was the tallest of the leaders of his generation who prepared the nation for the trials and triumphs of the Gandhian era.

Amongst the stalwarts of the freedom struggle in the pre-Gandhi era, the name of Lokmanya Tilak stands out as a colossus for his supreme courage, sacrifice, selflessness and for his historic role in the early phase of the independence movement.

Bal Gangadhar Tilak was born on July 23, 1856, at Ratnagiri, Maharashtra, in a middle-class family. Soon after his graduation, Tilak developed a serious concern for the social and political problems of his day. He wanted to reform the system of education introduced by the British and started a society to spread education in Maharashtra. But his restless mind could not remain limited to one field. He soon ventured into journalism and started a Marathi paper, Kesari. He passionately wrote for reforming the Indian society. On the problem of untouchability he wrote, “I would not recognise even God if he said that untouchability was ordained by him.” While advocating social reforms he turned the attention of people to the political problem — liberation of India from British rule. He began writing articles in the Kesari, asserting every Indian’s birth right to be free. This was a revolutionary doctrine to be preached in those days. This brought him into conflict with the empire and he was convicted on charge of sedition in 1897. However, this conviction proved to be a blessing in disguise: from a provincial leader, Tilak became a national leader.

In 1889 (the year Jawaharlal Nehru was born), Tilak attended the Bombay session of the Indian National Congress presided by Sir William Wedderburn. Tilak was then 33. Two other young Congressmen, who were to become his contemporaries, also appeared on the Congress platform for the first time—Lala Lajpat Rai (34) and Gopal Krishna Gokhale (33).

The Congress, since its birth in 1885, was dominated by the Moderates who had faith in British sense of justice and fair play, and believed in constitutional and lawful methods of agitation. This, however, dramatically changed with Lord Curzon’s decision to partition the sate of Bengal. The youth of India moved towards militant politics and direct action. Along with Bipin Chandra Pal and Lala Lajpat Rai, Tilak seized the opportunity of disillusionment against the British and denounced the “political mendicancy” of the Moderates. The trio of Bal-Pal-Lal, along with Aurobindo Ghose, became popular as “extremists”, though they preferred to call themselves “nationalists”.

Nehru recalls in The Discovery of India, “With the coming of age of the National Congress, which had been founded in 1885, a new type of leadership appeared, more aggressive and defiant and representing the much larger numbers of the lower middle classes as well as students and young men. The powerful agitation against the partition of Bengal had thrown up many able and aggressive leaders there of this type, but the real symbol of the new age was Bal Gangadhar Tilak from Maharashtra. The old leadership was represented also by a Maratha, a very able and a young man, Gopal Krishna Gokhale. Revolutionary slogans were in the air, tempers ran high and conflict was inevitable. To avoid this, the old patriarch of the Congress, Dadabhai Naoroji, universally respected and regarded as the father of the country, was brought out of his retirement. The respite was brief and in 1907 the clash came, resulting apparently in a victory for the old moderate section. (But) there was no doubt that the vast majority of politically-minded people in India favoured Tilak and his group.”

On June 24, 1903, an arrest warrant was served on Tilak in Bombay. The historic trial of Tilak on charges of sedition began on July 13. He was convicted and deported to Mandalay, Burma, where he was to spend the next 11 years of his life. On hearing the verdict, Tilak defiantly said: “All I wish to say is that, in spite of the verdict of the jury, I maintain that I am innocent. There are higher powers that rule the destiny of things and it may be the will of providence that the cause which I represent may prosper more by my suffering than by my remaining free.” In Mandalay, Tilak soon settled himself into the routine of writing and thinking. The man of action absorbed himself in reading, in learning new things and in contemplating on the true message of the Gita. A most fruitful result of this constant reading and reflection was the Geeta Rahasya. On June 8, 1914, Tilak was informed that his exile was over. He was then 58, and his health was broken, but his spirit was unbowed. On his return to India, he resumed his political activities.

According to Tilak’s biographer, D.V. Tamhankar, “The year 1916 was the most eventful in Tilak’s career. The early part of the year saw the foundation of the Home Rule League, its phenomenal success, the presentation of the public purse on Tilak’s 61st birthday, and his legal victory in the last sedition of the Lucknow Congress, which marks the zenith not only of Tilak’s life, but also, perhaps, of the history of the Congress. Tilak, who had previously borne a reputation for intransigence in politics, now appears in the role of a constructive and conciliatory stateman. The days of fiery speeches and denunciations are over; a new phase of compromise and responsive cooperation begins. He is seen at his best at the Lucknow Congress which marks a definite stage in the political evolution of India.” Under Tilak’s inspiration, there was a united demand for Swaraj, the first occasion when Muslims and Hindus, Moderates and extremists, Parsees and others spoke together with one voice to demand vital reforms. Tilak emerged as a messiah of Hindu-Muslim unity.

The formation of the Indian Home Rule League was the crowning achievement of Tilak’s political career. He had worked for 35 years to give concrete shape to the people’s political aspirations, largely aroused and sustained to by his own exertions and sufferings, and his labours at last bore fruit. The country could now speak out and demand its birthright without fear. The people had become conscious of their rights; their aspirations had assumed a definite shape, and they realised that a foreign bureaucracy “cannot be mended but must be ended”. Now the time had surely come, Tilak said, to demand control of the country’s affairs. But if the demand for Swaraj was to be effective, it must be made through a powerful and organised body. The Home Rule League was to be that body. It was founded on April 28, 1916, with its headquarters in Pune. A similar Home Rule League was started by Annie Besant (who the following year became the first woman president of INC) with its headquarters in Madras. Both the Home Rule Leagues supplemented each other. The Home Rule Movement marked the beginning of a new phase in India’s struggle for freedom. It placed before the country a concrete scheme of self-government.

Nehru, while unveiling a portrait of Lokmanya Tilak in Parliament on July 28, 1956, concluded his glowing tribute to Tilak: “It was not my privilege to come into close contact with Tilak. When he was at the height of his career, I was away in a far country, still a student. But even there his voice and his story reached us and fired our imagination. We early grew up under that influence and were moulded by it. In a sense, India to the youth of that time was what had been presented by Tilak, through what he said and what he wrote, and above all, what he suffered. That was the inheritance that Gandhiji had to start his vast movements with. If there had not been that moulding of the Indian people and India’s imagination and India’s youth by Lokmanya, it would not have been easy for the next step to be taken. Thus, in this historical panorama, we can see one great man after another coming and performing acts of destiny and history which have cumulatively led to the achievement of India’s freedom. We meet here not only to unveil the picture of this great man, the Father of India’s Revolution, but to remember him and to be inspired by him.”

Tilak was the tallest of the leaders of his generation who prepared the nation for the trials and triumphs of the Gandhian era. On August 1, 1920, a day before Gandhiji launched the Non-Cooperation Movement, Tilak passed away, thus marking the end of one and beginning of another era that culminated in the realisation of his dream of free India.