Amarnath Yatra cancelled due to COVID-19; virtual darshan to continue 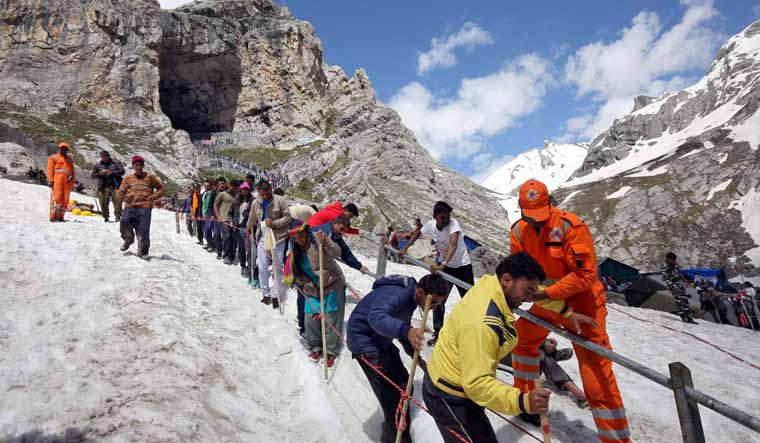 The Jammu and Kashmir government has decided to cancel the Amarnath yatra due to the COVID-19 pandemic.

The decision to cancel the annual pilgrimage was taken after the meeting of the Shri Amarnathji Shrine Board (SASB) today, in which the board members participated through a video conference to discuss the conduct of the Yatra 2020, a statement issued by Raj Bhawan said.

The meeting was presided over by J&K Lieutenant Governor G.C. Murmu,who is also the chairman of the SASB.

The statement said a threadbare discussion was held on the current circumstances of the COVID-19 pandemic and its likely impact on the yatra.

It said the board discussed the Supreme Court order dated 13.07.2020 in which the decision to conduct the yatra was left to the J&K government after assessing the ground realities prevailing in J&K.

It said the Board was informed that the arrangements were on track since February 2020, but due to the nationwide lockdown and COVID-19 pandemic, the government has continued to keep religious places and places of worship closed for the public. These prohibitions continue till July 31.

It said the board also noted that the pandemic had put the health administration system to its limit. July saw a sharp spike in the number of cases and as per health ministry data, Jammu and Kashmir had 14,650 total cases of COVID-19 as of July 21, of which 6,122 are active.

It said the health workers and security forces are also getting infected and the focus of the entire medical, civil and police administration is working to contain the local transmission of the COVID-19 pandemic.

It said the health concerns are so serious that the strain on the health system, along with the diversion in resources to the yatra, will be immense. This would also unnecessarily put the yatris at risk of catching COVID-19

It said the board also discussed the decision of the high court of J&K in writ petition (No CM No. 3022/2020 in WP(C) PIL No 5/2020 in which the court directed SASB to take a final view in light of the order of the Supreme court and keeping in view the compliance of all healthcare protocols, standard operating protocols notified by the Central Government as well as by the government of J&K.

It said the government made reasoned observations supported by facts which suggested that it would not be advisable to conduct the yatra 2020 and it would be advisable to cancel it this year in the larger public interest.

It said this would enable the health, civil and police to focus on the immediate challenges facing them rather than diverting resources, manpower and attention to the conduct of the yatra.

It said based upon the circumstances, the board decided with a heavy heart that it is not advisable to hold and conduct this year’s yatra and expressed its regret to announce the cancellation of yatra 2020. The board is aware of and respects the sentiments of millions of devotees and to keep the religious sentiments alive, the board shall continue the live telecast/ virtual darshan of the morning and evening Aarti.

Further, the traditional rituals shall be carried out as per past practice. Also, the Chhadi Mubarak shall be facilitated by the government, it said.