Efforts are still underway to bring the locust attack under control 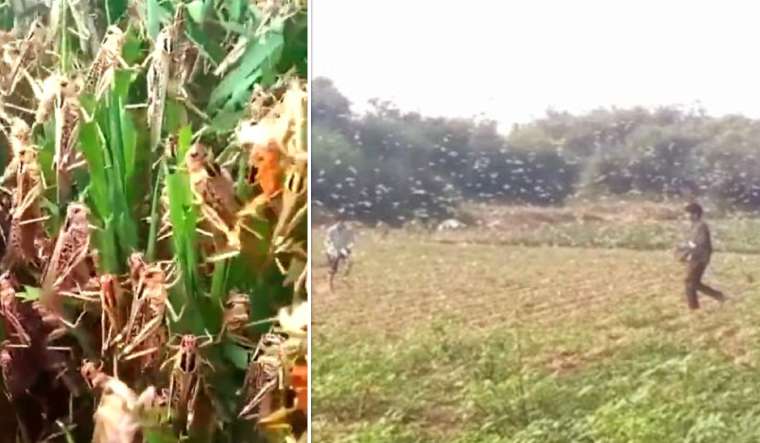 Ten swarms of locusts have entered and settled in five districts in Haryana as the state battles the pest attack along the border with Rajasthan. The locust swarms entered from Mahendergarh, and have settled in Rewari, Jhajjar, Sisra, Charkhi Dadri and Bhiwani on Saturday night and have reportedly caused about 15 per cent damage to crops, primarily pearl millet (bajra).

Haryana Agriculture minister J.P. Dalal had reached the affected areas late last night and took over anti-locust operations that are still underway even as swarms are progressing along with the wind. The worst-hit seems to be Mahendergarh district where the locusts have entered for the sixth time, owing to the rains settled in fields in five villages. Already alert farmers have resorted to banging utensils and even playing music systems to drive out the swarms. Local administration launched special operation ‘bare foot’ using 30 tractors and five fire tenders to spray pesticides the entire night, and have claimed to have gotten rid of 70 per cent of the swarm.

According to Surender Dahiya, the nodal officer for locust management in Haryana, the swarms are of varied sizes and are moving along the wind. They might congress into a big swarm. “The district administrations along with local farmers are already working to get rid of the swarms,” said Dahiya.

The villagers have pooled in money and hired DJ systems and bands, and roamed around in trucks playing loud music to ward off the locusts. The women in the villages are taking turns banging utensils to aid in anti-locust operations.

Meanwhile, Dalal has ordered a review of the crop loss and intensification of sprays to drive locusts away. “We have the situation under control and shall very soon get rid of the swarms. We have sufficient stock of the spray chemicals and machines to deal with the crisis. The farmers have been asked to be alert and we have intensified the spraying of chemicals in the affected areas,” said the agriculture minister while leading the operation from Loharu village in Bhiwani district.

According to Union Agriculture Minister Narendra Singh Tomar, action was being taken to control locust swarms. As per the ministry, starting from April 11 to July 9, 2020, control operations were carried out in 1,51,269 hectares in Rajasthan, Punjab, Haryana, UP, Gujrat and MP.

The United Nation’s food and agriculture organisation (FAO) has, meanwhile, asked India to be on high alert for next four weeks. The country is facing its worst locust attack in the last 26 years.