MP girls give up education, replace bullocks to help father in agriculture 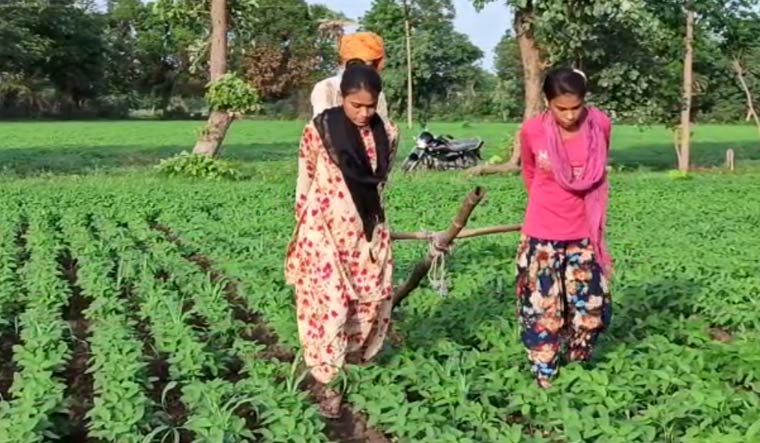 In a shocking situation, two girls—one of them minor—have been reportedly forced to give up education and replace bullocks for agriculture work with their father who is a poor marginal farmer in Mathura Khedi village in Agar Malwa district of Madhya Pradesh.

The family of Kumer Singh is so economically constrained that they were even unable to repair their house that got completely damaged in a storm about three months ago. As the family failed to receive any financial assistance or approval of a home under the PM housing scheme, fellow villagers contributed funds and the house is under repair currently.

Mathura Khedi village is located just 30 km from the Agar Malwa district headquarters. With sowing complete, Jamuna, 18, and her 16-year-old sister can be regularly seen pulling the traditional hoe implement in place of bullocks for weeding on their two bigha (0.8 acre) agriculture land.

Weeding is a process in agriculture where a hoe implement is normally pulled by bullocks, much like ploughing, to remove weeds from the spaces in between sapling trails.

Jamuna says that she studied up to class 8, but had to give up education as her father could not afford to send her out of the village for further studies and they had to help their father for agriculture as he was quite old. She also says that they could not get benefit of any government schemes and also they cannot afford to get bullocks to do the agriculture work. She mentions that her younger sister has also had to give up education for the same reason.

Kumer Singh says that he is forced to use his daughters in place of bullocks because of economic constraints. He said that he has often sought assistance under schemes and approached village sarpanch and panchayat secretary, but got nothing. Singh also says that he has been trying to get a house under PM Housing scheme for the last 10 years, but his name never appeared in the list of beneficiaries. He mentioned that villagers are helping repair his house currently.

The Congress has attacked the state government over the issue. Vice-chairman of the MP Congress media cell, Syed Zaffar, said that farmers were forced to commit suicide during the regime of Shivraj Singh Chouhan.

“Farmers’ situation improved when Kamal Nath ji led the state and their loans were waived. But now again, farmers are in a dire strait, so much so that even the nieces of ‘Mama ji’ (as CM Chouhan is known popularly) are forced to work in place of bullocks, giving up education. The government deserves to go,” Zaffar said.

District collector of Agar Malwa, Avdhesh Sharma, did not respond to phone calls or a text message. Additional district magistrate (ADM), N.S. Rajawat, said that he will bring the matter to the notice of the chief executive officer (CEO) of Zilla (district) Panchayat for suitable action.