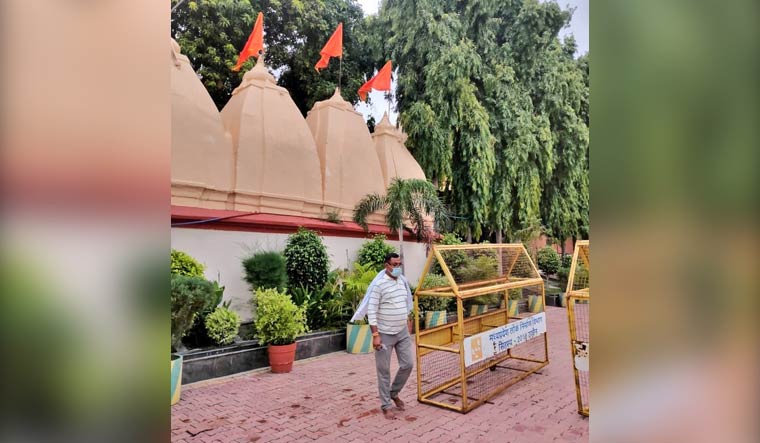 Wanted gangster Vikas Dubey was on Thursday evening handed over to the Uttar Pradesh police after a two-hour long interrogation by the Madhya Pradesh police, the superintendent of police of Ujjain, Manoj Kumar Singh has said.

The UP police team that arrived in Ujjain on Thursday evening, immediately left with the wanted gangster. An armed team of MP police officers also accompanied the team back to UP, the SP said.

However, as the SP did not give finer details of the happenings, several questions regarding the 'arrest' of Dubey, which the Congress leaders have claimed as planned surrender, continued to float unanswered.

How Vikas Dubey was taken into custody

Here is the sequence of events leading up to Dubey's capture, as stated by Singh at a press conference on Thursday evening.

First, a flower vendor in front of the Mahakal temple grew suspicious when the gangster brought flowers from his shop and called up two private security guards posted in the temple. The guards then kept a watch on Dubey and also informed their seniors as well as the police. After he had performed darshan, the guards accosted Dubey and asked for his identity. He first tried to mislead them and also tried to give them the slip, but later confessed to be Vikas Dubey, the SP said.

The officer added that Dubey was then taken into custody by the police who had arrived on the spot; senior officials later got in touch with the Kanpur senior superintendent of police and the STF team that was looking for Dubey to confirm his identity. The SP added that later in the evening, Dubey was handed over to the UP police team that had arrived in Ujjain after making a 'panchnama' (legal procedure in presence of five witnesses). He said that a case had not been registered in MP given the gravity of what happened in UP. He also did not make it clear whether Dubey was produced in the court. The SP also refused to give any other details on the matter, saying that investigation on several other issues were still on.

The seasoned criminal reportedly did not reveal much during questioning, sources said, except for the fact that he had fired at a police team in Kanpur, out of fear of encounter. Sources also said that Dubey had conceded that he had come to Ujjain to surrender, though nothing could be confirmed.

Through the day, Ujjain police detained a person named Anand Tiwari, said to be the manager of a local distillery and a relative of Dubey, who could have helped the gangster for his trip to Ujjain. Three others were also detained for questioning.

Also, two lawyers from Lucknow—identified as Suresh and Bittu—were detained, but a local police official was quoted as saying that as yet their connection with Dubey could not be ascertained.

By evening, there were also reports that three guards belonging to the private security agency, who were present during the incident at the Mahakal temple, were missing and their role in the entire episode was suspect. Police were reportedly probing their link to Dubey.

Interestingly, earlier in the day, Congress Rajya Sabha member Digvijaya Singh has indicated that the security agency posted at the temple was owned by a BJP member of parliament in the Rajya Sabha. Posting a video of private security guard walking Dubey out of temple premises in a relaxed manner on Twitter, Singh said “This is how the dreaded gangster Vikas Dubey was 'arrested' by MP Police for which Shivraj is taking credit. The credit should go to private security agency owned by BJP MP in Rajya Sabha, engaged at Mahakal temple in Ujjain.”

There are several discrepancies in the 'arrest' theory of Dubey and Congress leaders including ex-chief minister Kamal Nath have asked for a high-level probe in the 'surrender' of Dubey in Ujjain. Nath also said that the incident reeked of a major political conspiracy.

How did the hardened gangster reach Ujjain, far from the borders of Madhya Pradesh, without being detected despite a high alert, only to be allegedly identified by a flower vendor, and then nabbed by unarmed private security guards?

Also, it is being asked as to how photographs and video footage of Dubey before and after Dubey was taken into custody became available to the media so soon after the incident. Particularly a photograph, where Dubey is seen bare-footed, donning a mask and almost appearing to be posing before the camera, alone on the Mahakal temple premises. Digvijaya Singh also raised questions about this photograph.

There were earlier reports that he had used a private car to come to Ujjain and later that he had taken a private bus from Delhi to Jaipur and then to Ujjain from Kota in Rajasthan. However, inter-state bus service is currently banned in Madhya Pradesh due to the COVID-19 pandemic. Senior police officials could not be contacted for comments.