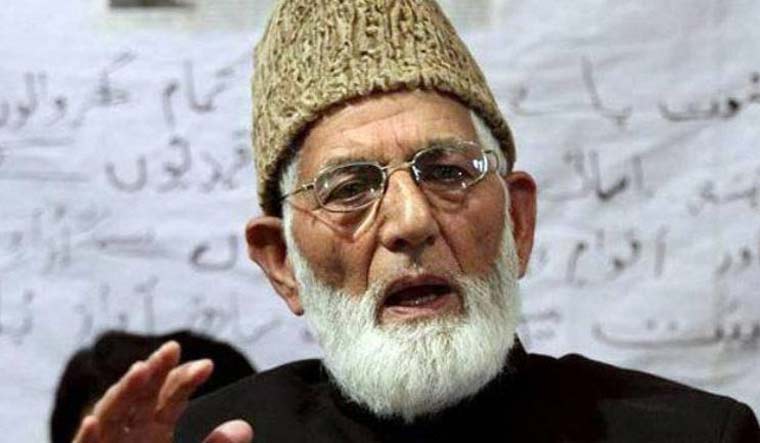 Veteran separatist leader Syed Ali Shah Geelani on Monday announced his decision to quit the All Party Hurriyat Conference (APHC) (G) due to disagreements, indiscipline, and lack of accountability among the constituents of the coalition of which he was the chairman since 2003.

In a detailed statement addressed to the constituents of the APHC, 90-year-old Geelani, who has been under house detention for several years now, listed indiscipline and refusal of the members to face accountability as major reasons for his decision to dissociate himself from the coalition.

The ailing hardliner said in the statement that the significance of the APHC chapter of Pakistan occupied Kashmir (PoK) is only representative and not decision-making.

“For some time now, especially, for the last two years, a lot of complaints have been received against the members representing different constituents of the APHC in Azad Kashmir (PoK) like currying favours with the government there,” Geelani said in a statement.

He said internal bickering and financial mismanagement of the APHC chapter in PoK have become talk of the town.

Addressing the APHC constituents, he said after investigations some of the representatives of the constituents in PoK were ousted while the rest were being probed.

“But the investigations were scuttled by your representatives. They deemed it as an insult and refused to cooperate and launched a propaganda in which my statements were distorted to the extent of demanding an inquiry into my will,” Geelani said.

He said the representatives then held a meeting of the ‘so-called Shura’ (advisory group) to create a parallel structure. The leaders of the APHC sided with their representatives in PoK and endorsed their statements and acts and attributed that to him, added.

Geelani said when Article 370 was revoked by India “to merge Kashmir so as to repeat the story of Palestine” he tried to reach out to the APHC constituents, but despite his best efforts failed to establish any contact.

He said faced with accountability, the members of the APHC have assembled and shown great unity despite restrictions.

Geelani said he became the life-long chairman of the APHC in 2003 on the insistence of the same leadership but now they have become rebellious and have very little regard for him.

He said he has decided to quit the APHC as he can’t answer for the misdeeds of the leadership of the AHPC.

“You people are free to make your own decisions,” he said, adding that Syed Abdullah Geelani will continue to represent him, PoK and abroad.

The decision to quit the APHC has come at a time when the separatists are facing intense pressure from the Centre after the Article 370 move.