The party staged a protest in Bengaluru, leading to snarled-up traffic 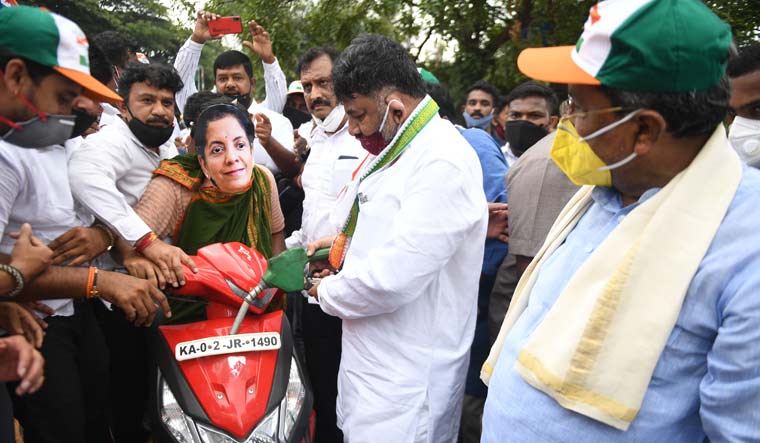 The Centre must immediately roll back the fuel price hike as people are already facing a huge health and economic crisis due to the COVID-19 pandemic, demanded KPCC chief D.K. Shivakumar, who led a bicycle rally in Bengaluru on Monday to protest the price hike.

Shivakumar, who was joined by senior Congress leaders Rajya Sabha member Mallikarjun Kharge and leader of the opposition Siddaramaiah, cycled from his residence to the Congress office in Queens Road, which resulted in a traffic jam as thousands of party workers turned up for the protest.

They submitted a memorandum to Governor Vajubhai Vala, urging him to direct the Centre to roll back the hike in prices and export duty on petrol and diesel imposed since March 2020.

"The hike is unprecedented and unjust. In the last six years, the BJP government has hiked the export duty on diesel by 820 per cent and petrol by 258 per cent and earned Rs 18 lakh crore. The profiteering of the Modi government by repeated hike in fuel prices has surpassed all forms of exploitation. The price increase in the last three-and-a-half months for diesel is Rs 26.40 and for petrol is Rs 21.50 per litre," stated the memorandum.

Further, the Congress party observed that the crude oil prices had reduced to Rs 3,288.71 per barrel (159 litres) on June 24, 2020, which translates to Rs 20.68 per litre. But the price of petrol and diesel has touched Rs 80 per litre. "This fuel price hike is sheer profiteering by the Modi government, which is fleecing the common man. We are ready to be booked for standing with the people," said Shivakumar.

However, the Congress leaders who until recently dubbed the lockdown imposed on March 24 “ill-timed” but demanded a second lockdown in the wake of the spurt in COVID-19 cases in Bengaluru, earned the wrath of people and the government for flouting lockdown norms.

The BJP leaders criticised the "irresponsible behaviour" of the opposition party.

Home Minister Basavaraj Bommai warned of filing a case against the Congress leaders for violating the Disaster Management guidelines. "The Congress party was not granted the permission to hold a rally as the lockdown norms bar political rallies and protests till June 30. We will initiate action against the leaders for violating the social distancing norms and for not wearing masks," the minister said.