'India should open Andaman to US, Japan to track Chinese submarines' 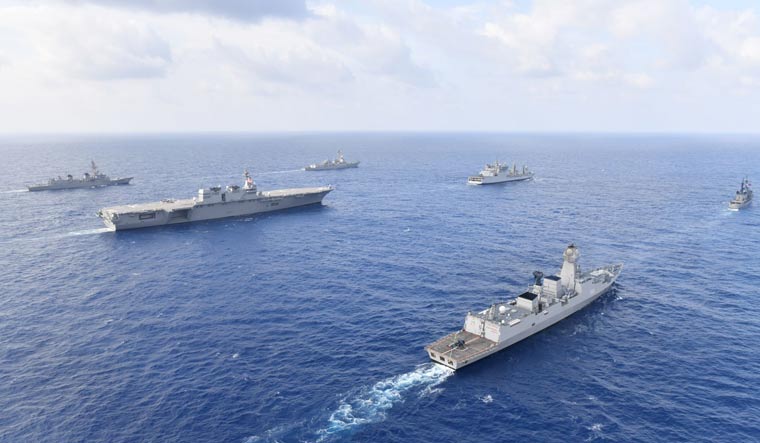 (File) Ships of the navies of Japan, India and the US sailing in the South China Sea | US Navy's 7th Fleet

The clash in Galwan between the Indian and Chinese armies and the subsequent military build-up by both sides has triggered the worst bout of tension between the two countries in decades.

Interestingly, one domain of competition between India and China has seemingly been ignored in the din over the Galwan debate: The maritime arena. This is perplexing as China's People's Liberation Army Navy (PLAN) has mounted a massive modernisation and shipbuilding programme in the past two decades and also increased forays into the Indian Ocean region.

On Friday, Sujan R. Chinoy, a retired diplomat and seasoned China watcher, argued that India must consider "opening up of the Andaman and Nicobar Islands to the friendly navies of the US, Japan, Australia and France, among others". Chinoy is the director-general of the Manohar Parrikar Institute of Defence Studies and Analyses, a major think tank. Chinoy had served as India's ambassador to Japan and also as consul general in Shanghai.

Chinoy expressed his views in a policy brief of IDSA that was published on Friday. Chinoy noted the "Tri-Services Andaman and Nicobar Command (ANC) has progressively emerged as a lynchpin of India’s regional maritime engagement in the Bay of Bengal and the Andaman Sea", where a number of regional navies had made port calls. Chinoy discussed visits to Port Blair of ships of the navies of the UK, Australia and France since the past two decades.

Chinoy noted that Chinese ships and submarines have been making regular forays into the Indian Ocean in recent years and referred to increased ties between Beijing and the governments of Myanmar, Bangladesh and Thailand. Both Bangladesh and Thailand have signed deals for Chinese submarines. Chinoy noted China's interest in the Indian Ocean would increase as its economic and strategic interests grow. This could result in "regular forays by Chinese nuclear submarines". "While monitoring warships is relatively simpler, keeping track of Chinese submarines through a wide strategic anti-submarine warfare (ASW) network is an asset-intensive and complex task," Chinoy explained.

"The Andaman & Nicobar Islands are a strategic asset for India to assert its dominance on the major East-West maritime trade route that passes through the Malacca Strait. It has often been referred to as India’s ‘unsinkable aircraft carrier’ to the East. As close to 80 per cent of China’s seaborne trade passes through this region, the possibility of it being throttled raises the spectre of the ‘Malacca Dilemma’ for China," Chinoy wrote.

Chinoy referred to close cooperation between the US and Japan in anti-submarine warfare based on development of underwater surveillance sensors and deployment of maritime patrol aircraft. “A similar approach for strategic ASW surveillance has been suggested in the Indian Ocean through collaboration between India, Japan, Australia and the US,” Chinoy wrote.

Chinoy argued that access for US Navy ships to Andaman and Nicobar is in accordance with the Logistics Exchange Memorandum of Agreement the two nations signed. Prime Minister Narendra Modi had agreed to a similar pact with Scott Morrison, his Australian counterpart, in a summit earlier in June. Chinoy said India and Australia "should consider expanding the scope of cooperation by formalising a protocol for ensuring an effective underwater surveillance system".